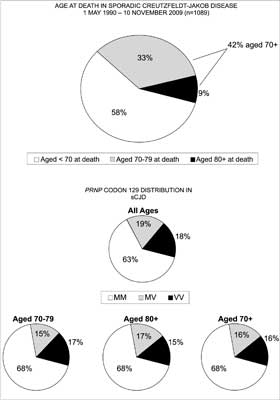 Fig. 1. (upper panel) Age at death in sCJD (1 May 1990 – 10 November 2009; n = 1089); (lower panel), PRNP codon 129 distribution.
The Polish data are very interesting in this respect: there are 6 of 30 cases of sCJD over 70 (20%); the 129 codon data are available for 3, 2 x MM, 1 x MV.
The literature on the subject of this review is very limited.
De Silva and colleagues (36) reviewed 12 cases over 80 years of age and added a case of 86-year-old CJD patient. The duration of disease for those 12 cases ranged between 1 and 5 months, the EEG showed PSWCs in 6 cases but was atypical in another six, and they presented as rather typical sCJD. The 86-year-old age case presented with disorientation and self-neglect, jerky limb movement and on EEG, slow background rhythms and periodic complexes. Terminally, she had frontal release signs. Neuropathological examination revealed spongiform change and immunoexpression of PrPSc.
The oldest case was published by Buganza et al. (37). This was a 98-year-old patient admitted to the hospital because of an ataxic gait of 10 days duration. The following day – myoclonic jerks were observed, followed by – generalized seizures. The EEG revealed continued seizure activity turned into periodic sharp wave complexes (PSWCs), otherwise typical for CJD. Western blot analysis revealed type 1 PrPSc, and molecular analysis revealed that the patient was a Methionine homozygote at the 129 codon of the PRNP gene. Neuropathological examination showed widespread spongiform change and diffuse PrP-immunoexpression.
There are several points to be raised by those very limited observations. First, all those cases presented as typical sCJD. The only possible exception is generalized seizures in the case of Buganza et al. (37). Of note, Collins et al. (38) described a case of 82-year-old woman who also presented with generalized seizures. However, that case was not only a methionine homozygote, but also a carrier of T188A mutation. Thus, it is tempting to speculate that seizures may be a sign of CJD in the elderly.
Those old CJD cases are also interesting from a pathogenetic perspective. According to the prion theory, sCJD may be caused by a stochastic event of a change of a normal PrP isoform into its pathologic counterpart. However, if this is really a stochastic event, it should be time-dependent, thus the number of sCJD cases should increase with age and definitively the reverse is observed (fig. 2-3), the number of sCJD cases in – old age is small. 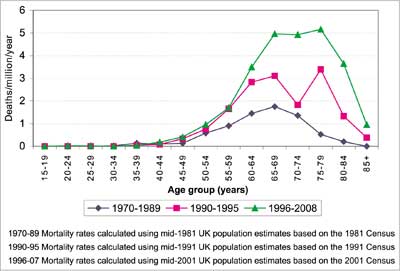 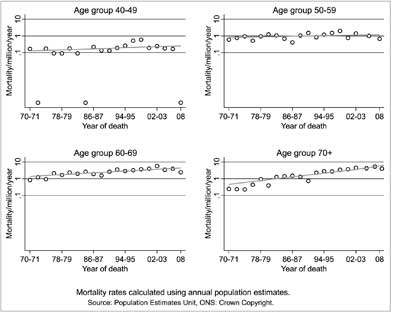 Fig. 3. Trends in mortality from sporadic CJD by age: 1970-2008. Courtesy of Prof. Robert Will, NCJDSU, Edinburgh, UK.
Variant CJD (vCJD) is worthy of separate consideration. vCJD is caused by a passage of BSE from bovine to humans and occurs in younger patients. However, Lorains et al. (39) described a unique vCJD case in a 74-year-old patient. He presented to the hospital with psychiatric symptoms, visual hallucinations and delusions of 1 month duration. His cognitive state declined, and he died with bilateral bronchopneumonia. At autopsy, abundant florid plaques, typical for vCJD were found in the brain and widespread PrPSc immunoreactivity was detected. As – for all definite vCJD cases this case was a methionine homozygote at codon 129 in the PRNP gene.