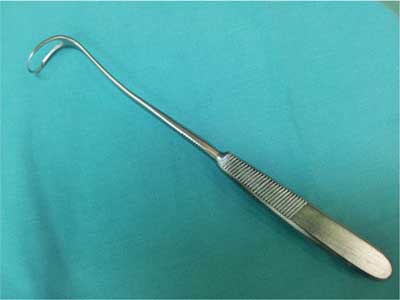 Fig. 1. Beckman’s adenoid curette.
In the described cases we tried to reach hemostasis through nasal tamponade for 5-7 minutes, compression with a hydrogen peroxide or Xylometazoline moistened swab for 1-3 minutes, tonsils point compression for 5-7 minutes or spot amphoteric coagulation. To treat the post-surgical bleedings antihemorragic medicines such as tranexamic acid (Exacyl) and etamsilate (Cyclonamine) or mucous vessels-obstructing medicines i.e. nasal xylometazoline or compression with a swab with a few drops of adrenaline, were used. Non-suppressible bleedings were an indication to introduce the Bellocq’s tamponade (fig. 2). 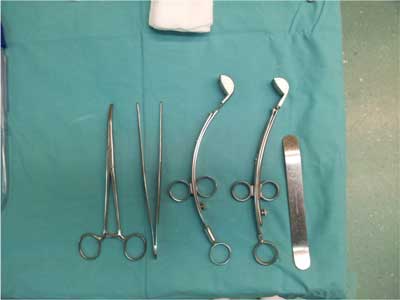 Fig. 2. La Force’a quillotine.
In 9 children due to unsatisfactory hemostasis it has been decided to introduce the Bellocq’s tamponade. In 16 cases the hemorrhage had place in the day zero post-operation, in 6 of them it occurred in the first hour during their stay in the monitoring room. In another 10 cases it happened in the next few hours back in the Otolaryngology Department. In 1 case the non-suppressible bleeding took place in day 1 post-operation.
In 4 cases it was decided to keep the patient with Bellocq’s tamponade in the post-surgery room in terms to monitor their life parameters. All the other children were taken back to the Otolaryngology Department.
All considered children received first intravenous and then consecutive oral antibiotics for an average of 8.35 days. 94% of them were prescribed tranexamic acid 20 mg/kg/day first intravenous and then oral for an average of 6.45 days and etamsilate 9 mg/kg/day first intravenous and next oral for an average of 7.5 days.
Two children received a transfusion of 1 unit of packed red blood cells (PRBC), 1 unit of cryoprecipitate and 1 unit of fresh frozen plasma (FFP). One child received 1 unit of packed red blood cells and 1 unit of fresh frozen plasma. Another 2 received only 1 unit of packed red blood cells. One child had only 1 unit of fresh frozen plasma. In the operated group 10 patients were O blood type, 12 were A type and 3 were B type.