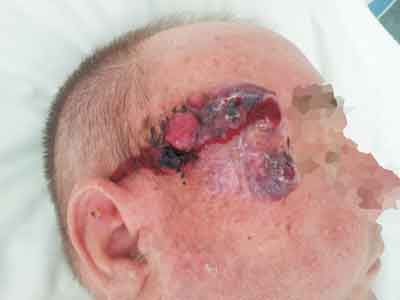 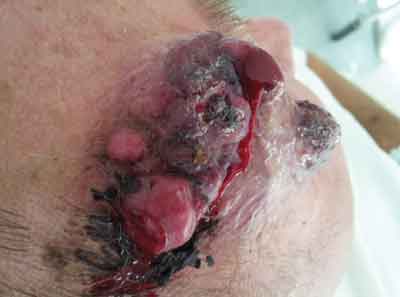 Fig. 2. Bleeding Merkel cell carcinoma of the facial skin.
He had no any other symptoms, there was no history of weight loss and loss of appetite. The patient was not treated chronically diseases. He had no surgeries before and there was no history of carcinoma in patient family. Blood test and other routine hematological examinations and biochemical tests were within normal limits.
On physical examination, there was bleeding tumor size 55 x 65 millimeters. Regional lymph nodes were not enlarged. The patient was qualified for surgery. In general anesthesia has been wide tumor resection of the right temporal area with adequate free margins and free graft skin was taken from the supraclavicular region. The tumor was collected for histopathological examination. Histopathological examination revealed Merkel cell carcinoma. The tumor was excised in its entirety. The duration of surgery was 65 minutes. Patient after surgery felt good and did not complain of pain. The postoperative period was uncomplicated and the patient left the ward in the sixth day after surgery. The patient is in the care of outpatient surgical oncology.
DISCUSSION