Poniżej zamieściliśmy fragment artykułu. Informacja nt. dostępu do pełnej treści artykułu tutaj
Zamów prenumeratę czasopisma!
© Borgis - New Medicine 4/2007, s. 100-101
*Eliza Brożek-Mądry, Mieczysław Chmielik
Nasal cytology in children with chronic rhinosinusitis or nasal septum deviation
Department of Pediatric Otolaryngology, Medical University of Warsaw, Poland
Head of Department: Prof. Mieczysław Chmielik, MD, PhD
Summary
Summary
Introduction. Nasal cytology enables to estimate the condition of nasal mucous membrane in patients with nasal pathology. The elements evaluated with this examination include epithelial cells and alluvial cells, such as lymphocytes and granulocytes.
Material and method a group of 30 children with chronic rhinosinusitis without polyps and 30 children with nasal septum deviation were included into the investigation. Patients had no symptoms of acute infection. Both groups had an exfoliative cytologic examination of mucosa and the specimen were obtained from the lower middle concha. Then the specimen were fixed with alcohol on the microscope slides and dyed with hematoxillin-eosyne. A microscopic evaluation of the cytograms was conducted by one person.
Results. The most common cytogram observed in chronic rhinosinusitis was neutrophilic one, while in nasal septum deviation it was normal. The specimen with presence of morphotic elements, such as red blood cells were observed only in patients with nasal septum deviation.
Conclusions. 1. inflammatory character of cytology in patients with chronic rhinosinusitis. 2. exposition to mucosal microdamage in patients with nasal septum deviation. 3. Non-invasiveness of cytologic examination. 4. differences in cytology between a group of children with CRS without polyps and a group of children with nasal septum deviation.
Key words: cytologic examination, chronic rhinosinusitis, nasal septum, nasal concha, children.
INTRODUCTION
Nasal cytology seems to be a valuable diagnostic tool but there is not much data in literature showing its results in nasal pathology. It is particularily important in children due to its painless and non-invasive character. As one of the parameters of respiratory mucous membrane it found its position in the diagnostics of allergic diseases. Normal nasal cytology presents mostly the columnar epithelial cells (picture 1) (1-4). 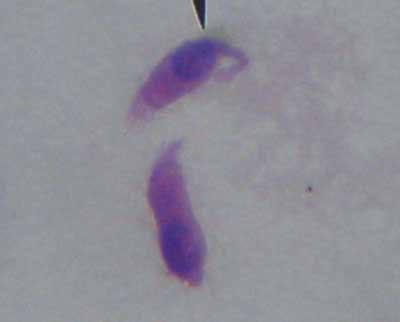 Pic. 1. Columnar epithelial cells of the normal mucous membrane with visible cilia
AIM
Estimation of nasal cytology usefulness in chronic rhinosinusitis (CRS) without polyps and nasal septum deviation in children.
MATERIAL AND METHOD
Thirty patients were collected in the group of children with CRS without polyps (15 females, 15 males) aged 5 to 17 years (mean age – 12 years) and thirty patients with nasal septum deviation (10males and 20 females) aged 8 to 17 years (mean age 14 years) in the period of two years between 2005 and 2007. Children included into the examined group had no ciliary dyskinesia measured with naso-ciliary clearance. All patients in the examined group had an exfoliative cytology taken from the inferior nasal concha. The material was then transferred on the microscope slides, fixed with 95% alcohol and dyed with hematoxillin-eosyne. Such prepared cytology was next evaluated under a biologic microscope Motic model 2820. This evaluation included the presence and count of epithelial cells such as columnar, squamous, basal and goblet cells and also alluvial cells such as neutrophils, limphocytes, eosinophils and monocytes.
RESULTS