INTRODUCTION
Though the problem of the vaccine preventable diseases should be nearly completely solved all over the world, the access to modern immunization possibilities has been challenged.
Fortunately, varicella is a mild infection in most cases. However, in 2-6% of all the cases potentially serious complications can occur in previously healthy children and adults (1). Varicella is a highly contagious disease predominantly affecting children aged 1-9 years, and approximately 80-90% of children are seropositive for VZV by the age of 15 years (2). Varicella and related immediate and long-term complications put a significant medical-economic pressure on national health systems.
Vaccines against VZV infection have been for years available in both Hungary and Poland. Polish and Hungarian experts in vaccinology prepared the recommendation several years ago, varicella infection has been discussed atlocal pediatric conferences, and studies about disease morbidity and complications have been published in local medical journals (3-8). Parents and communities (kindergartens, schools etc.) have been educated in TV programs, web pages, with leaflets; the vaccine uptake, however, is far from optimal. Epidemiology has not changed and the incidence in Europe is still high.
Epidemiological background in Europe
European varicella surveillance data isavailable on the website of the European surveillance network for selected vaccine preventable diseases hosted in Sweden by the European CDC (www.euvac.net). This network collects age-specific data including vaccination status, laboratory confirmation, hospitalization and complication rate from 19 countries (fig. 1). 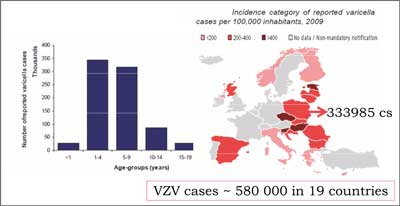 Fig. 1. Varicella Zoster Virus Epidemiology in Europe. Source: www.euvac.net. (Varicella Zoster Virus Epidemiology in Europe) Source: www.euvac.net
In 2008, 2009 and 2010 almost 900,000 varicella cases were reported from 19 countries. In 2010, 99.5% of all varicella patients were unvaccinated, and patients with breakthrough infection (0.5%) had received at least one dose. These data indicates that Europe seems to have a high prevalence of VZV infections and that vaccine uptake seems to be poor.
Of note, Poland was the country to report most varicella cases of all cases in Europe (n = 183 446 (2010)), with 59% (2008-2009) and 31% (2010) (Varicella surveillance report 2010; www. euvac.net).
VZV prevention in Hungary
In Hungary, the incidence of vaccine preventable diseases has decreased only for those diseases where a compulsory vaccination schedule exists. For decades an age-related vaccination calendar of National Immunization Program (NIP) has been successfully followed in Hungary. Compulsory vaccines get complete reimbursement of the Ministry of Health and have achieved 98% vaccination coverage. Unfortunately, there has not been any modernization in the calendarfrom 2009 to date, whereas in other countries several new vaccines have been introduced as part of the immunization scheme. Vaccines not included in the calendar are optional, and some of them are partially reimbursed. However, the incidence of vaccine preventable diseases as varicella and tick-born encephalitis has not changed significantly in the last few years. These vaccines are available only in the private market with low coverage and consequently no significant epidemiological impact. In the last year (2010) 39.602 varicella cases (with no death) were reported.
Varicella vaccine has beenavailable since 2003, however in the private market only. As a consequence, its vaccination coverage is very poor (about 20%), and only a small percentage of immunized persons have received two shots. In spite of the efforts performed since 2003 (recommendations, continuous professional and parental education) the number of people vaccinated has reached a plateau, so new strategies are needed to further increase the awareness for the disease.
VZV prevention in Poland
After a peak in the early 1990s, the number of new varicella cases has increased since 2006-2007. Meanwhile the number of vaccinated person hadshown a constant increase since 2006 from 8,000 to 30,000 cases in 2010 – mostly financed by parents, except in risk groups, where it has been covered by the government as compulsory vaccination – still with no epidemiological impact.
Poland has a very similar vaccination system to Hungary and other post-Soviet countries. According to the regulation that was introduced in 2008, children below 12 years of age receive mandatory vaccination against varicella if they are part of the following risk groups9: (1) immunocompromised, with a high-risk of severe disease; (2) with acute lymphoblastic leukaemia in the remission period; (3) with HIV; (4) before immunosuppressive treatment or chemotherapy; (5) children until 12 years of age from an environment of people described in point 1) who have not developed varicella yet; and from October 2011 (6) children until 12 years of age other than in point 1) to 5) vulnerable to an infection because of environmental reasons, especially those vulnerable because of living in common spaces which enables virus transmission and an outbreak occurrence, including mainly long-term care homes, orphanages, day nurseries and other care institutions.
In both countries, the epidemiological situation which is representative for other European countries shows similar tendencies without improvement using the current prevention methods. To achieve changes, international recommendations and successful programs with varicella vaccination as UMV (universal mass vaccination) are available.
WHO recommendation for VZV vaccination
According to the WHO recommendation, routine childhood immunization against varicella may be considered in countries where (1) varicella is a relatively important public health and a socioeconomic problem; (2) vaccination is affordable; and (3) high and sustained vaccine coverage can be achieved. In addition, vaccination should be offered in any country to individual adolescents and adults without a history of varicella, in particular to those at increased risk of contacting or spreading the infection (10, 11). The United States was the first to follow the WHO recommendation.
The rationale for vaccine control against
VZV infection
Varicella is an extremely contagious disease experienced by almost every child or young adult in the world. Four million cases had occurred every year in the United States in 1990-1994 before the introduction of a vaccination; nearly 10,000 patients had required hospitalization and 100 patients had died (10). A cost-benefit analysis in the United States showed that routine varicella vaccination is likely to save 5 times the investment (12). Even when only direct costs were considered, benefits almost balanced the costs (10, 13, 14).