INTRODUCTION
Kaposi sarcoma it is relatively rare disease in the world. This disease was first time described in 1872 as an idiopathic, multipigmented sarcoma of the skin (1). Typically, classic Kaposi sarcoma is observed in men from Sub-Saharan Africa, Eastern Europe or Middle Eastern descent (2, 3). It is rare that patient suffer from multifocal lesions in one leg. The authors of this article presented such HIV-negative patient.
CASE REPORT
A 60-year-old man, Caucasian race, was admitted to the Department of Surgical Oncology because of diagnosed cutaneous Kaposi sarcoma of the left leg and skin tumor in left inguinal area. In an interview with the patient, he informed us that tumor on the left leg was present for 3 months and gradually expanded. The patient reported no pain in this area. Surgical biopsy showed Kaposi sarcoma.
He had no any other symptoms, there was no history of weight loss and loss of appetite. The patient was not treated for chronically diseases. He had no surgeries before and there was no history of carcinoma in patient family. Blood test and other routine hematological examinations and biochemical tests were within normal limits. He was not HIV positive patient.
On physical examination, whole the left leg was with tumors (fig. 1 and 2). There were not enlarged inguinal lymph nodes. Also ultrasound examination of the inguinal lymph nodes did not show pathologically enlarged lymph nodes. 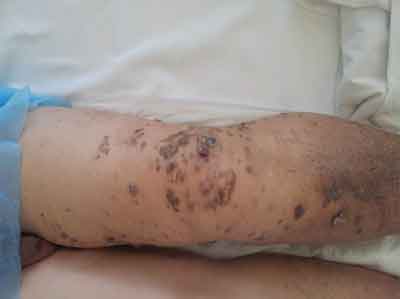