Poniżej zamieściliśmy fragment artykułu. Informacja nt. dostępu do pełnej treści artykułu tutaj
Zamów prenumeratę czasopisma!
© Borgis - Nowa Pediatria 2/2003, s. 121-122
Beighton P.1, Kozlowski K.2
Spondylometaphyseal dysplasia sutcliffe type (case report)
1 Department of Human Genetics University of Cape Town
2 Department of Radiology, Royal Alexandra Hospital for Children, Sydney, Australia
Streszczenie
The first case of spondylometaphyseal dysplasia Sutcliffe type from Africa is reported. The hallmark of this spondylometaphyseal dysplasia is bilateral coxa vara. It would be appropriate for skeletal survey or at least lateral X-ray of the spine and knees to be performed in every person with idiopathic bilateral coxa vara.
Słowa kluczowe: coxa vara, spondylometaphyseal dysplasia.
Introduction
Spondylometaphyseal dysplasia Sutcliffe type (SMDST) was delineated as a separate entity in 1965 (6). Thereafter, in 1974, a father and his daughter with SMDST were reported as having a variant of spondylometaphyseal dysplasia (1). The fifth patient with SMDST, and the third reported under the accepted designation was not described until 1989 (2). A year later Langer et al (5) reported 7 affected persons and coined the term "SMD corner fracture type”. Two further cases with SMDST, one with severe genu valgus deformity, were reported in 1992 (3). In 1993 Kozlowski et al (4) published three children with SMDST. A forth patient with bilateral coxa vara had rectangular platyspondyly with smooth vertebral plates, which were different from the oval shaped vertebral bodies of SMDST. This individual probably had a variant form of SMDST. The authors stressed that corner fractures are not a unique feature of SMDS but also occur in other complex generalised bone disoders (spondyloepimetaphyseal dysplasias).
Case report
This boy was referred to the Departament of Human Genetics in Capc Town at the age of 2 years with bilateral coxa vara which had been detected following disturbance of gait. A cleft lip and palate had been repaired during infancy, but he was otherwise well. Clinically, he was normal, apart from proportionate small stature. Radiographs revealed gross coxa vara with irregularity of the upper metaphyses of the femoral necks. The skull, spine and hands were reported as normal. The parents were nonconsanguinos and the were no affected kin. The child was seen again at the age of 3 years and 3 months. He still had a disturbed gait, but was otherwise well. His length was 84.5 cm (below the 3rd centile); The upper segment was 48.5 cm, and the lower segment 46 cm. Radiographs showed severe coxa vara and mild dysplasia of the spine. A striking findings was "corner fractures” of the lower medial femoral metaphyses and upper tibial metaphyses (Fig. 1A-C). 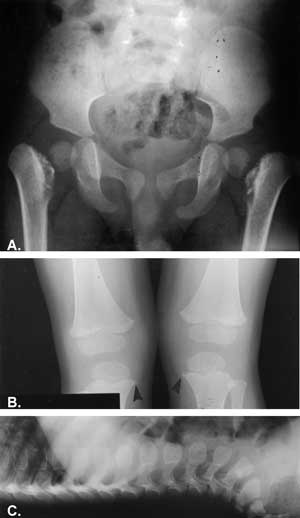