Poniżej zamieściliśmy fragment artykułu. Informacja nt. dostępu do pełnej treści artykułu tutaj
Zamów prenumeratę czasopisma!
© Borgis - New Medicine 1/2004, s. 2-4
Judyta Cielecka-Piontek1,2, Arkadiusz Styszynski1, Katarzyna Wieczorowska-Tobis1
Knowledge of Risk Factors for Hypertension in the Elderly
1Department of Pathophysiology, University of Medical Sciences, Poznań, Poland
2Department of Pharmaceutical Chemistry, University of Medical Sciences, Poznań, Poland
Summary
Aim. The aim of the study was to analyze knowledge of risk factors for hypertension in elderly subjects.
Method. The study involved 154 inhabitants of one of the small towns in the Wielkopolska region, aged 65 years and older (mean age: 72.5±6.8 year). This group made up 84.1% of the elderly and geriatrics in the town. All were asked to list the risk factors for hypertension. For analysis of the results, the subjects were divided into groups of different sex (females – n=100 and males – n=54) and age (group I: age<75 and group II: age ł75).
Results. The mean number of listed risk factors was only 1.3±1.2 (range 0-9). It must be pointed out that 40 subjects (26%) did not know any risk factors and an additional 57 individuals (37%) listed only one. There was no difference between females and males in respect of the number of listed risk factors (1.3±1.2 vs 1.3±1.3, respectively). However, females knew that stress increased the risk of hypertension more often than males (54.0% vs 35.2%; p<0.05).
Conclusion. In conclusion, knowledge of the risk factors for hypertension was very poor in the studied subjects. It was not affected either by sex or by age.
Key words: hypertension, elderly, risk factors.

INTRODUCTION
The treatment of elderly persons is a problem of increasing importance, because in many countries, including Poland, those people make up a growing group in demographic structures. Population ageing is evident even in single cities e.g. in Poznań. In 1991 the percentage of elderly was 11% there, rising to 13% by 2001.
The risk of cardiovascular diseases increases very strongly with age. Organic changes in all organs, both due to physiological ageing and long term exposure to various environmental factors contribute to this process. Among the cardiovascular diseases which are more prevalent with age, hypertension affects 40 to 60% of elderly patients (1).
For many years there has been no doubt that hypertension in elderly persons should be treated (2, 3). However, pharmacotherapy for hypertension is particularly difficult in this age group. Firstly, and typical of advanced age, polypathology results in polytherapy. Secondly, both altered pharmacokinetics and pharmacodynamics due to ageing increase the risk of undesirable side effects from the applied drugs. Moreover, the low incomes of many elderly patients limit the possibility of administration of many pharmaceutical preparations. From this point of view, in elderly subjects the elimination of the risk factors for hypertension due to anti-ageing intervention is extremely important. These factors include high-sodium and high-lipid diets, smoking, obesity, stress, physical inactivity, and illnesses leading up to hypertension such as diabetes, renal, and thyroid diseases (4). The significant impact of modifiable risk factors on the evolution of hypertension is a considerable argument for the education of aged persons. Proper anti-ageing education would delay the start of pharmacological treatment, and reduce the doses of applied hypotensive drugs. Yet, it should be kept in mind that the education of elderly persons can be complicated because of reduced efficiency of the cognitive functions and, as a consequence, difficulties in understanding instructions given by the physician. Additionally, individual nutritional habits, which take their shape in earlier stages of our life, are very difficult to alter in advanced age. On the other hand, many publications report that, following proper education, it is possible to reduce the number of patients requiring pharmacological treatment for hypertension (5). Thus, it seems that the need for education is unquestionable, especially in age groups where pharmacotherapy is related to high risk.
The purpose of this study was to evaluate elderly subjects´ knowledge of the risk factors for hypertension.
MATERIAL AND METHOD
Characteristics of participants
In our study we examined 154 individuals aged from 65 to 91 (mean age 72.5±6.8 years), being 100 females and 54 males (mean age of females and males was 73.0±7.1 and 71.5±6.0 years, respectively). The subjects lived in one of the small towns in the Wielkopolska region, where they made up 84.1% of the geriatric population in that town.
Design
At the beginning, subjects were asked about their age and sex. Next, they were questioned about the risk factors for hypertension. The percentage of persons who mentioned individual risk factors was counted for each of our listed factors. The results of inquiries were analyzed in groups of persons based as follows:
a) sex – 100 females and 54 males
b) age:
– group I – subjects younger than 75 years (110 individuals)
– group II – subjects of 75 years and older (44 individuals).
The number of females and males in each of these two groups was not significantly different.
RESULTS
The results were presented as mean ± standard deviation. Mean values for particular groups were compared using the test for unpaired variables (Mann-Whitney test). The frequency of positive results in each of the matched groups was compared using the Fisher test. A P value of less than 0.05 was considered significant.
Knowledge of risk factors for hypertension in the studied population
The elderly subjects listed from 0 to 6 risk factors for hypertension. However, the mean number of listed factors was only 1.3±1.2. There were forty subjects (26.0%) who were unable to mention even one factor. Conversely, only two individuals (1.3%) listed six factors. The frequency of listing particular factors is shown in Figure 1. The most frequently mentioned risk factors were stress (47.4%), a high lipid diet (29.2%), and life-style (13.6%). 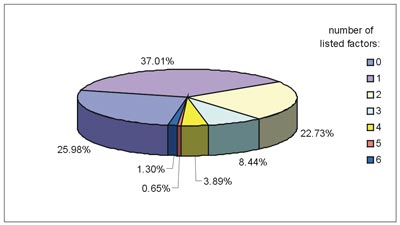