Poniżej zamieściliśmy fragment artykułu. Informacja nt. dostępu do pełnej treści artykułu tutaj
Zamów prenumeratę czasopisma!
© Borgis - New Medicine 1/2004, s. 12-16
Anna Skalska1, Tomasz Ocetkiewicz1, Marek Żak2, Tomasz Grodzicki1
Influence of Age on Postural Control Parameters Measured with a Balance Platform
1Department of Internal Medicine and Gerontology, Jagiellonian University School of Medicine, Kraków, Poland
Head of Department: Prof. Tomasz Grodzicki MD, PhD
2Chair of Clinical Rehabilitation, Academy of Physical Education, Kraków, Poland
Head: Prof. Krzysztof Spodaryk MD, PhD
Summary
Aim. Increased body sway in an upright position, represented by the displacement of the centre of feet pressure, is a result of impairment of the postural control system.
The aim of the study was to evaluate the influence of age on postural control measurements, measured with a balance platform.
Method. 97 persons were divided into 3 groups: I – 34 volunteers, mean age 23.18±1.99 years, II: 17 persons, mean age 51.06±4.76 yrs., III: 46 persons, mean age 73.26±8.36 yrs. During quiet standing on the balance platform, the length of path of the centre of pressure, its mean velocity, and mean displacement in the lateral and antero-posterior directions were measured.
Results. All parameters of body sway were significantly lower in the youngest group, when compared with the middle-aged (p<0.005) and elderly groups (p<0.0001). The results in groups II and III did not differ, except that the average lateral deflection during an eyes-closed test was significantly higher in the oldest group, p<0.02. All measurements correlated significantly with age, p<0.0001.
Conclusion:
1. Postural sway increases with age, which is represented by an extension of the length of path of the centre of feet pressure, and by an increase in its lateral and antero-posterior displacements.
2. Impairment of the postural control mechanism appeared at about 40 years of age, which can be due to both ageing and comorbidity.
3. The average lateral displacement of the centre of feet pressure seems to be the best indicator of the influence of age on the postural control system.
Key words: postural sway, ageing, postural control, balance platform.

INTRODUCTION
Balance is the ability to maintain the body&acutes centre of gravity over its base of support (1). It depends on the efficiency of the balance control system, based on central processing of visual, vestibular and somatosensory inputs, and proper neuromuscular response (2, 3, 4, 5, 6, 7). The function of this complex feedback system deteriorates with age and increased comorbidity (3, 5, 8, 9, 10) This results in increased body sway during stable standing (3, 5, 11, 12, 13, 14), and is a significant independent predictor of the risk of falling (5, 15, 16).
To estimate the sway, measurement of the movement of the centre of foot pressure (CFP) a computerized balance platform is used (3, 5, 6, 10, 11, 12).
The aim of this study was to evaluate the influence of age on postural control, measured using the parameters of the centre of foot pressure, using a computerized balance platform.
MATERIAL AND METHOD
Subjects
Ninety-seven participants were divided into 3 age groups. The first group consisted of 34 healthy volunteers (24 women and 10 men) aged between 17 and 28 years, mean age – 23.18±1.99. The second group included 17 persons, 8 women and 9 men, aged 41 to 60 yrs., mean age 51.06±4.76. In the third group were 46 people, 30 women and 16 men, aged 61-95, mean age 73.26±8.36. Groups II and III included hospital patients. The main causes of their admission to hospital were pneumonia or exacerbation of coronary heart disease. Most of them also suffered from arterial hypertension, congestive heart failure, diabetes mellitus, chronic obstructive pulmonary disease, or arthritis, but the examination was performed during a stable period in their illness. All the study participants were able to walk on their own and were able to maintain an upright position.
Procedure
The balance test was performed with an Italian Cosmogamma balance platform. This comprises: a dynamometric balance platform, and an IBM AT PC computer with an appropriate program for diagnostic tests. After a 5-minute rest in a sitting position, the examined patient was placed on the platform in the upright position, with the upper extremities parallel to the body. Bare feet were aligned with the centre line of the platform, with a distance of 7 cm between the right and left first metatarsal bones, and the lateral ankles on a line 14 cm from the rear edge of the platform.
Every person participated in two tests, one with the eyes open, and the second with eyes closed. To perform the analysis, we used 4 parameters:
1.The length of the CFP path, meaning the distance of movement of the centre of feet pressure – DCFP (mm) (Figure 1),

Fig. 1. Examples of the path length for the CFP: a/ short but displaced in left and posterior direction; b/ long.
2.The mean velocity of the CFP – VCFP (mm/s),
3.The mean displacement of the CFP in the lateral plane – MLCFP(mm); (Figure 2), 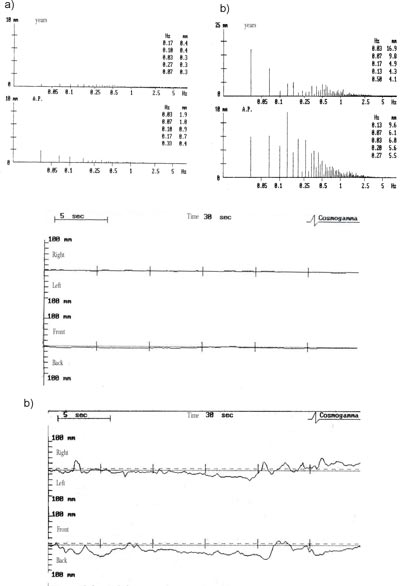 Fig. 2. The examples of normal (a) and increased (b) CFP measurements in lateral and antero-posterior direction represented by higher sticks.
4.The mean displacement of the CFP in the antero-posterior plane – APCFP (mm).
Statistical analysis
The statistical analysis was performed with the STATISTICA 6.0 PL program. Descriptive statistics were used to identify mean values and standard deviations. Because the data were not normally distributed, we used the Mann – Whitney test for unconnected pairs to compare the data. To establish the relationship between age and postural stability parameters, the Spearman correlation coefficient was used.
RESULTS