Poniżej zamieściliśmy fragment artykułu. Informacja nt. dostępu do pełnej treści artykułu tutaj
Zamów prenumeratę czasopisma!
© Borgis - New Medicine 4/2008, s. 82-88
Aleš Gába, Jarmila Riegerová, *Miroslava Přidalová
Evaluation of body composition in females aged 60–84 years using a multi-frequency bioimpedance method (InBody 720)
Department of Functional Anthropology and Physiology, Faculty of Physical Culture, University of Palacký in Olomouc, Czech Republic
Summary
Introduction: Population aging is a serious problem of developed countries worldwide. According to the UN prognosis, the Czech Republic will be among societies with the highest proportion of seniors in the world in 2050. Due to a sedentary lifestyle we can observe an adverse reduction of physical activity, which is critical in the senior population for maintaining optimal physical and mental health. It is understandable that any information on the actual state of the senior population is very valuable. However, we find a deficiency of research targeted at gerontology in the Czech Republic.
Aim: The presented project is aimed at assessing the influence of involution changes on selected anthropometric characteristics in a group of women aged 60–84 years.
Method: The cross-sectional study used a multi-frequency bioimpedance method (InBody 720) to determine the body composition. The monitored group (n=169) was composed of females with a mean age of 69.91 years. The group was divided into five subgroups to evaluate involution changes.
Results: A statistically significant difference was detected (p <0.05) in body height between sub2 and sub3 based on statistical analysis. The mean values of visceral fat were located above the threshold of the health safety zone in all age categories. A significant increase of the visceral fat was detected between sub1 and sub2 (p <0.05). The mean values of WHR evidenced central distribution of the body fat. Differences of mean WHR values between sub1 and sub2 as well as between sub2 and sub3 are significant (p <0.01).
Key words: aging, elderly population, body composition. 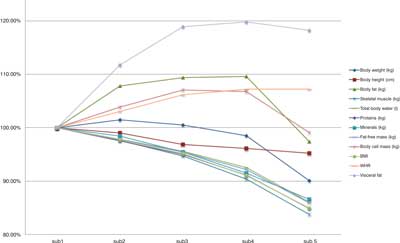