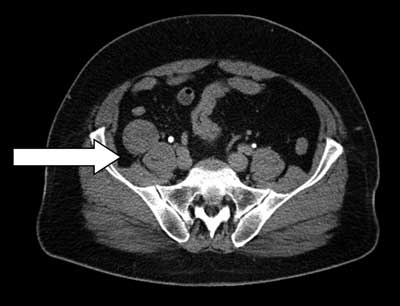 Fig. 1. Axial CT image demonstrates a retroperitoneal mass of size 45 x 44 x 55 millimeters on the right side
Complete surgical excision of the tumor was performed without damage to the main neuro-vascular structures of the retroperitoneum. The material was sent for routine histopathological examination. The surgery lasted 60 minutes.
Histopathological examination showed areas with nuclear palisading which are typical for schwannomas. The Ki-67 proliferation index was very low in the examined specimen. The specimen underwent immunochemical examinations and occurred to be S-100 positive and CD-34 negative. The patient felt good after the surgery and did not report any pain. After the surgery, the symptoms were alleviated. The postoperative period was uncomplicated and the patient was discharged five days after the procedure.
DISCUSSION
Retroperitoneal schwannomas are rare benign neoplasms which comprise up to 6% of primary retroperitoneal tumors (4). Retroperitoneal schwannomas are usually located in the paravertebral space or in the presacral region (5). Schwannomas have a predilection for head and neck, but also are observed in upper and lower extremities (1-3).