Poniżej zamieściliśmy fragment artykułu. Informacja nt. dostępu do pełnej treści artykułu tutaj
Zamów prenumeratę czasopisma!
© Borgis - Nowa Stomatologia 2/2005, s. 55-58
Adam Okon1, 2, Anita Okon3
Computer simulation of Xunplates – micro-mechanical devices for moving bones in a cleft palate
Symulacja komputerowa Xunplates – mikromechanicznych urządzeń do przesuwania kości w rozszczepie podniebienia
1Department of Conservative Dentistry, Medical University of Warsaw, Poland
Head: Professor Elżbieta Jodkowska
2Department of Medical Informatics, Medical University of Warsaw, Poland
Head: Professor Robert Rudowski
3Xuntech Medical Systems, Warsaw, Poland
INTRODUCTION
Currently used orthodontic systems, both fixed and removable, have some limitations. Their natural force insertion point is the crown of a tooth or the mucosa, which determines how they work: by changing the inclination of the tooth or by axial movement. In either case, a force configuration is unfavorable, far from the centre of the tooth. These disadvantages are not present in the sub-mucosal orthodontic system.
The micro-plates as an attachment for the forces were introduced in Orthoanchor ® orthodontic system (1, 2). The main disadvantage of this system is the presence of intra-oral wires and direct contact between the bone and the outside world. This problem is to be eliminated in our Xunplates system. All parts of the system: pulling/pushing brackets, wires and micro-plates are planned to be inserted under the surface of the mucosa or periosteum. No part of the system protrudes through the mucosa, which means that it remains sterile. Placed under mucosa, it allows axial tooth movement in favorable, central force insertion point. The most important feature of this system is that it allows bringing the alveolar bones close together in a cleft palate. The application of forces with implanted Xunplates will prevent improper frontal growth and will model bone shape to restrict the size of a future transplant.
The initiation of treatment too early or too late is also a problem we have to face in maxillofacial reconstruction. Early surgical treatment of cleft palate causes inhibition of frontal development of the maxilla after surgical intervention. Late surgical treatment, on the other hand, causes improper bone formation – a wide cleft that makes reconstruction extremely difficult (3, 4, 5).
So what is the ideal solution? Not to inhibit or depress bone growth and to move and/or bend the bone before merger surgery, as in the treatment scenario proposed as a result of our simulations.
Virtual Reality (three dimensional graphics) programmes are widely used in industry for testing non-built (as yet) systems such as cars, airplanes etc. Computer simulation allows for the improvement of such systems without building several expensive prototypes in the process (6, 7, 8, 9). It was obvious that constructing a prototype of a micro device for moving bones in cleft palate would be costly and difficult. That is why we decided to use computer simulation before building the first real prototype.
This paper presents an initial study on the construction of a system of micro devices placed under the mucosa and exerting pressure on the cleft palate to move it into the desired direction of growth.
AIM
The aim of the work was to create a system for controlling the rebuilding of the palatal and alveolar bones with an orthodontic system placed sub-mucosally and driven by impulses of an electromagnetic field.
During this study we wanted to test this system using Virtual Reality before building expensive prototypes.
METHOD
The virtual patient – a newborn with a cleft palate, was created as a deformation of a 3D model of a newborn skull (see Fig. 1). The 3D data were obtained using Computer Tomography (we used internet resources; no child was exposed to radiation for this study). Using computer simulation, based on the literature (7, 8, 9, 10) and radiographs of a cleft palate, bones were removed and a large cleft was created. A smoothing filter was applied locally on the cleft to make it more natural. 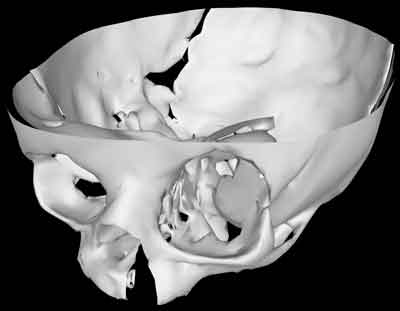 Fig. 1. Virtual Patient.
We superimposed the virtual models of our Xunplates system onto a skull model. Xunplates is a system of micro-plates, brackets and titanium wires designed to be inserted during atraumatic surgery under local anaesthesia. Micro-plates tightened with screws are used as bone attachments. The key component of the system is a sub-mucosal micro-mechanical device driven by impulses of an electromagnetic field, which can move the micro-plates in a chosen direction.
The insertion points are chosen earlier using computer tomography. Standard Helical CT with 3D reconstruction and CAD/CAM (Computer Aided Design/Computer Aided Manufacturing) module can be used. Prepared leads will be used for the insertion of elements without visual control. After (2 mm) wounds have healed, the moving process will begin. The micro-mechanical device will be activated using small impulses of an electromagnetic field and will exert a small, constant force on the micro-plate. This process may last several months, because there is no direct contact between the sterile sub-mucosal parts and the outside world. We can choose the direction of movement by turning several micro-devices on and off. Electric power and control data are transmitted through the mucosa using solenoids. An electronic system was planned as a One-wire(r) bus, commonly used in microcontroller&acutes technology. The level of magnetic impulses used in the device is much lower than that emitted by a cell phone, and should not have biological implications.