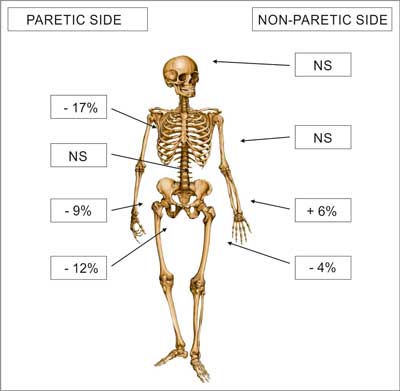 Fig. 1. Regional changes in bone density between 1 and 12 months after stroke in 18 individuals with pronounced paresis from unilateral stroke. Percentages are based on data from Ramnemark et al. (3) NS – non statistically significant
Immobility seems to be a major factor responsible for generalized bone loss. It was found that decrease in BMD correlated with the duration of hemiplegia-induced immobilization, time and degree of functional recovery, and severity of functional deficits (8, 13). Everyday capacity, muscle mass and strength as well as physical fitness of the paretic leg were found to influence BMD of the proximal femur (8, 10, 12).
Apart from reduced physical activity and immobilization the key mechanisms of bone loss in patients following stroke include: endocrine, nutritional, and pharmacological factors.
An important role in the development of osteoporosis seem to play disturbances in the vitamin D – parathyroid hormone (PTH) axis. In elderly individuals higher risk of stroke is often combined with vitamin D deficit, dramatically widespread in this population (14). It was shown that up to 83% of inpatients were vitamin D deficient and significant part of them had extremely low serum 25-hydroxyvitamin D concentrations, below 10 ng/mL (10, 15).
In most elderly patients with hemiplegic stroke even severe vitamin D deficiency is not accompanied by secondary hyperparathyroidism. It was suggested that elevated calcium serum levels, being the result of immobilization, reduced PTH secretion, and inhibited renal synthesis of 1,25-dihydroxyvitamin D. Consequently, stroke patients may show low serum concentrations of both 25OH vitamin D and 1,25(OH)2 vitamin D together with normal or low levels of PTH (10, 16-18).
Another factor that can be implied in post-stroke osteoporosis is vitamin K deficiency. It was found that vitamin K2 is essential for γ-carboxylation of bone Gla-protein, which is indispensable to set up bone matrix. In hemiplegic persons vitamin K deficiency was associated with low BMD and increased incidence of hip fractures on the paretic side (10).
Older age, mobility impairment, dysphagia, cognitive deficits and social isolation are important factors for poor nutrition frequently found in stroke patients. Apart from reduced vitamins D and K supply malnutrition may result in vitamin B12 and folate deficiency, and secondary hyperhomocysteinemia. It was shown that elevated serum homocysteine concentration influenced enzymatic collagen crosslinking in the posttranslational modification of collagen molecules, decreased bone tissue quality, and played important role in bone fragility associated with aging (10, 19, 20).
Treatment with oral anticoagulants is essential part of regimen in significant part of elderly stroke patients. It was found that warfarin, probably by inducing vitamin K deficiency, accelerated decrease of BMD in hemiplegic stroke patients compared with hemiplegic patients not given anticoagulants (10, 21).
Long-term therapy with heparin, often used as venous thromboembolism prophylaxis, leads to reduction in BMD and increased risk of bone fractures that may occur within 6 months of starting therapy. Heparin-induced bone loss is dose dependent and reversible upon discontinuation. It was suggested that low molecular weight heparins were associated with fewer fragility fractures while newer heparins, including fondaparinux, were predicted to be bone neutral for bone metabolism (10, 22).
Administration of antiepileptic drugs (AEDs) which attenuate liver 25-hydroxylation of vitamin D is another possible cause of accelerated bone loss in post-stroke patients (10). AEDs were suggested to exacerbate bone disease by increasing activity of cytochrome P-450 system and vitamin D catabolism. It was found that treatment with drugs being liver enzymes inductors, such as phenytoin, phenobarbital, carbamazepine and primidone resulted in greater bone loss compared to noninductors such as clonazepam, topiramate, valproic acid, ethosuximide and gabapentin (23).
FRACTURE RISK