Poniżej zamieściliśmy fragment artykułu. Informacja nt. dostępu do pełnej treści artykułu tutaj
Zamów prenumeratę czasopisma!
Księgarnia Borgis / dział medyczny
© Borgis - New Medicine 2/2009, s. 35-39
*Eryk Chrapowicki1, Bogdan Ciszek2, 3
Anatomical review of the human fetal superior hypogastric plexus
1Department of Surgery, Gostyńska Memorial Hospital, Warsaw
2Department of Anatomy, Centre of Biostructure Research, Warsaw Medical University
3Department of Neurosurgery, Bogdanowicz Memorial Hospital for Children, Warsaw
Summary
Aim of the study.The aim of the study was to describe the morphology and topography of the human fetal superior hypogastric plexus (SHP). It is an important structure of the human autonomic nervous system. Its innervation range emphasizes its important role in several critical reflexes of the urinary and genital organs; therefore understanding of morphology and topography of the SHP is very important in surgical procedures performed in the pelvic region.
Material and methods. The study was carried out on 25 human fetuses of both sexes, aged 16-28 weeks. They were fixed in 10% formaldehyde solution, and subsequently blood vessels were injected with colour latex. Dissections of the fetuses were carried out under a surgical microscope. In each case, the SHP was dissected followed by establishment of its trunk and margins. The upper and lower margins of the plexus were defined. The length, width, and distances between margins of the plexus and inferior mesenteric artery and promontory were measured. The statistical analysis of the measurement results based on Pearson&acutes correlation was performed.
Results. The plexus trunk, upper and lower margins may be easily established. Two upper branches and two hypogastric nerves were observed in each case. The width of the plexus and its inferior margin marked by the level of its bifurcation were constant. The most variable feature of the plexus was its length.
Conclusions. We established that the superior hypogastric plexus is an easily identifiable and preparable structure. Its form and margins may be rather distinctly separated.
Key words: fetus, autonomic nervous system, superior hypogastric plexus, intermesenteric plexus.

Introduction
Knowledge of anatomy of the abdominal and pelvic part of the autonomic human nervous system plays a more and more important role along with progress in surgery of the distal part of the alimentary tract and genitourinary system.
The superior hypogastric plexus (SHP) forms the lower part of the intermesenteric plexus. It is located in front of the aortic bifurcation, fifth lumbar vertebra, and sacral promontory. The above-mentioned plexus typically originates beneath the beginning of an inferior mesenteric artery; however, the distance between the main part of the plexus and the artery may vary (7).
In front of the sacral promontory, the plexus typically divides into two hypogastric nerves that descend curving laterally and backwards into the pelvic cavity. They are located medially to the ipsilateral common iliac vessels. Delicate interlacing fibres often bridge the space between those two nerves (3).
The hypogastric nerves terminate in corresponding pelvic plexuses, and contribute branches to the distal colon, ureter, testis or ovary. The range of their innervations presents evidence of the important role they play in many visceral reflexes of the genital and urinary organs.
The SHP contains sympathetic postganglionic fibres from the intermesenteric plexus, and parasympathetic fibres from the splanchnic pelvic nerves which enter it at the level of hypogastric nerves (1, 2, 6, 8).
Recent development of rectal laparoscopic surgery caused increased interest in the anatomy of the superior hypogastric plexus, and understanding it better would help to reduce the number of serious complications related to plexus surgical injury. The most common ones include urine incontinence and impotence (5, 9, 10, 11).
So far only a few papers have poorly described fetal development of SHP (4, 7, 13).
Therefore the authors of this study present their investigation on morphology and topography of the superior hypogastric plexus in the human fetus.
Aim of the study
The aim of the study was to describe the morphology and topography of the human fetal superior hypogastric plexus.
materials and Methods
The study was carried out on 25 human fetuses of both sexes (14 male and 11 female), aged 16-28 weeks, which were destined for scientific research. They were fixed in 10% formaldehyde solution for five weeks, and subsequently blood vessels were injected with colour latex. Dissections and examinations of the fetuses were carried out under a surgical microscope with microsurgical instruments. In each case, the superior hypogastric plexus was dissected followed by establishment of its trunk and margins. The upper margin of the plexus was defined as the point where two upper branches from the intermesenteric plexus connect. The lower margin was established as the place where the plexus bifurcates into hypogastric nerves.
The following parameters were measured:
1) Length and width of the plexus. The first parameter was defined as the distance between the point of connection of the upper branches and the bifurcation and the second one as SHP width measured at its widest point;
2) Distance between upper plexus margin and the inferior mesenteric artery;
3) Distance between lower plexus margin and promontory;
4) Shift of the plexus to the left from the mid-sagittal body plane.
We performed a statistical analysis of the measurement results based on Pearson&acutes correlation.
Results
In all analyzed specimens the SHP was composed of a central, well defined part, called the trunk. It consisted of nerve fibres and compact connective tissue.
It was located in the plexus midline. Upwards the trunk communicated by two branches (upper right branch = URB and upper left branch = ULB) with the intermesenteric plexus. Downwards the body divided into the two hypogastric nerves (left hypogastric nerve = LHN and right hypogastric nerve = RHN). The central body&acutes shape was variable. It was typically elongated and trapezoidal (22/25 cases) with the base directing downwards. The figures below present the structure of the plexus. 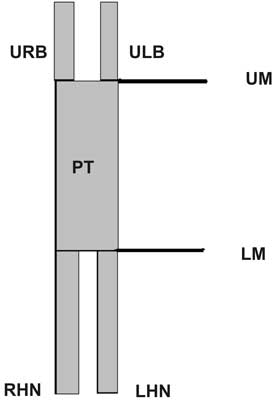 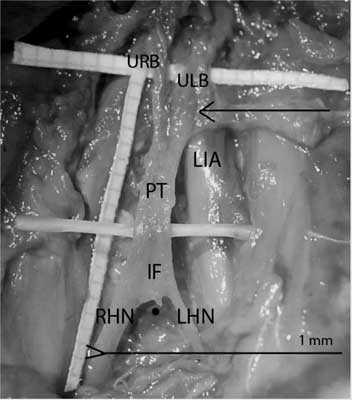 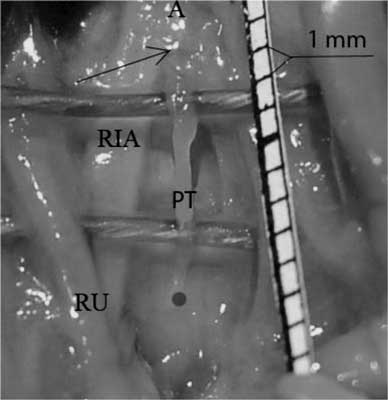 Fig. 3. SHP as a thin filament.
PT – plexus trunk; RIA – right iliac artery; RU – right ureter; The arrow points at the aortic bifurcation; The black dot points the promontory.
In two cases there was an opening (”hole”) in the centre of the trunk. 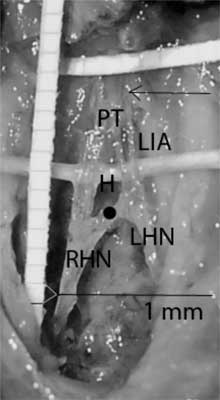 Fig. 4. Central "hole” in the body of SHP.
PT – plexus trunk; RHN – right hypogastric nerve; LHN – left hypogastric nerve; H – The "Hole” in a central part of the plexus; The arrow points at the aortic bifurcation; The black dot points the promontory.
The length of the plexus body varied from 3 to 13 mm. Minimal width of the plexus was 0.5 mm, maximal width was 7 mm. The authors found a positive correlation between length and width of the plexus (P 0.50) but no correlation between fetal age and length as well as width of the body was found.
In 23 cases two branches connecting the SHP with the intermesenteric plexus were found. The left one was better developed in 15 cases. In two cases instead of well defined nerves the authors observed only diffused fibres. In the remaining cases, the two branches were similar. The authors did not observe any case of better development of the right branch compared to the left one. In one fetus they found a very wide first communicating fibre to the plexus of the low mesenteric artery which resembled a third branch of the dissected SHP structure.
The SHP always divided into two terminal branches, called the hypogastric nerves.
The lower margin of the plexus was usually located at the promontory level. In eight fetuses (8/25) it was located up to 3 mm above the promontory. The lower margin of the SHP was never found below the promontory.
The plexus origin, described as the distance between the inferior mesenteric artery and the upper margin of the plexus, was much more variable. The above-mentioned distance ranged from 3 mm to 9 mm. The plexus originated at the level of the inferior mesenteric artery in three cases (3/25). There was no statistical correlation (P -0.55) between the above-mentioned distance and the length of the plexus.