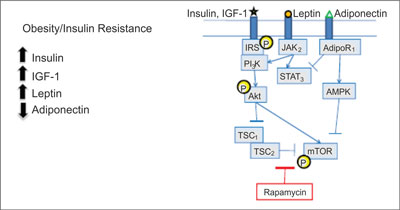 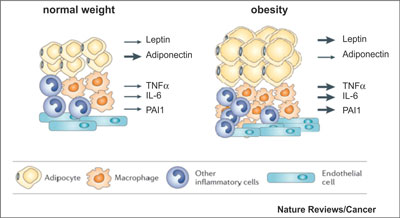 Fig. 2. Changes in adipose tissue in obesity (2).
Estrogen
The postmenopausal women are about 70% of all breast cancer patients. Most of the estrogen produced in postmenopausal women is derived from fat tissue via aromatase, the enzyme converting adrenal androgens into estrogen. The more fat tissue there is, the greater the levels of estrogen produced and in circulation. Such estrogen can fuel the growth of estrogen receptor – positive breast cancers. Studies show that mice made obese by being fed a high-fat diet and then inoculated with breast cancer cells had significantly greater tumor growth rates than mice similarly inoculated, but fed a normal diet (19). When inoculated obese mice were given an aromatase inhibitor, the tumor growth rate was markedly inhibited. Clinical studies confirm that circulating estradiol levels are linked to risk of recurrence of breast cancer. It does not explain the association of obesity with premenopausal breast cancer outcomes or with estrogen receptor – negative breast cancer outcomes (20). This mechanism also does not explain why estrogen is linked to both pre- and postmenopausal endometrial cancer risk (21).
Insulin
Another factor making obese women more susceptible to breast cancer recurrence and death is higher than normal insulin level, usually linked to obesity. BMI increase correlate closely with increases in fasting insulin levels in the nondiabetic population. Greater levels of insulin are linked to an increased risk of distant recurrence and death in breast cancer patients (22, 23).
The fetal version of the insulin receptor is overexpressed in breast cancer cells and can combine with itself or with IGF-1 to turn on the PI3K or Ras/Raf signaling pathways known to foster the growth of several types of cancers. In early-stage breast cancer women, total expression of the fetal insulin receptor is linked to worse survival rates, as is activation of the receptor by IGF-1. Insulin effects on breast cancer prognosis often are not apparent 5 years after diagnosis, suggesting that insulin may be an early mediator of the prognostic effects of obesity in breast cancer, other factors are going to be important later on. Leptin may be one of these factors. Higher levels of leptin are linked to an increased risk of distant recurrence and death from breast cancer – an effect that persists beyond 5 years postdiagnosis (24).
OTHER MOLECULAR MECHANISMS
A number of other hormones, enzymes, and growth factors, that govern cellular energy balance and growth are thought to play a role in increasing cancer risk in obese individuals, including IGF, AMP kinase, leptin, adiponectin, inflammatory cytokines.
IGFs (insulin-like growth factors)