INTRODUCTION
Hernia repair represents a considerable proportion of the operations performed in general surgery. The number of specific operations reflects hernia incidence in the general population; typically, approximately 80% of repairs are inguinal, 10% incisional, 5% femoral, 4% umbilical, and < 1% represent other types of repairs. Surgical efforts are directed towards increasing efficacy, which, particularly in hernia surgery, converts into safety, lowering complication rates, shortening the length of the hospital stay, and lowering the recurrence rate. These goals are achieved by improvements in surgical procedures, the materials used, and general perioperative care (i.e., minimally invasive surgery with laparoscopy as its major part, tension-free procedures, adequate prophylaxis and the use of certain artificial materials in recreating abdominal wall integrity).
Our interest is directed on biomaterials. Currently, the most common is polypropylene mesh, and Lichtenstein’s inguinal hernia repair remains a gold standard technique. However, in our study, we decided to examine the use of liquid, photoinduced stiffening polymers, such as 1838-DMA, P1838-UR, PDEGA-UR and PEG-DA, in an experimental model of rabbits with artificially induced hernias.
AIM
1. To evaluate the potential application of injectable polymer biomaterials in the treatment of abdominal wall hernias using an animal model.
2. To compare tissue reactions elicited by the new polymer biomaterials and a commercial polypropylene mesh.
3. To determine the influence of the new injectable biomaterials on the kidneys and liver.
MATERIAL AND METHODS
The study group consisted of 20 New Zealand rabbits; there were 10 males and 10 females, with an average weight of 2.5 ± 0.6 kg. During stage 1 (tab. 1), we surgically created abdominal wall hernias in the group of rabbits. First, we established access to the jugular or femoral vein for blood sample collection. General anesthesia was induced by the intravenous administration of Domitor (0.2 ml IV) and ketamine (20 mg [0.2 ml] IV; Orion Pharma). After shaving the fur and disinfecting the skin, a ventral midline incision was made below the navel; the 5-cm incision went through the skin, subcutaneous tissue, fascia and muscle flap, uncovering the peritoneum. Afterward, the skin was closed by primary, continuous suture. The rabbits were observed for 30 days, allowing wound healing and hernias to occur.
Table 1. Study schedule.
During stage 2 (tab. 1), the rabbits were randomized into five groups of four rabbits each for treatment with the following polymers: group 1 – P1838-UR/PEG-DA 85/15; group 2 – P1838-DMA; group 3 – P1838-UR, 4; group 4 – PDEGA-UR, and group 5 – control group, standard polypropylene mesh. Hernia repair surgery was performed under general anesthesia as described above. Blood samples for laboratory examination were collected from the jugular or femoral vein. The surgical field was shaved and disinfected, and the skin and subcutaneous tissue were incised over the hernial sac (fig. 1-3). The dissected sac was discharged into the abdominal cavity, and the appropriate polymer biomaterial was introduced into the hernial defect. The amount of biomaterial used per application varied from 1-2 cm3. Groups 1-4 received 5 minutes of irradiation with a UV lamp, which turned the liquid into an elastic, porous sponge (fig. 4 and 5). The subcutaneous and cutaneous tissues were closed using a continuous suture. In group 5, the mesh was not exposed to UV irradiation, and it was not fixed with sutures. After hernia repair, the rabbits were kept under clinical observation for 28 days. 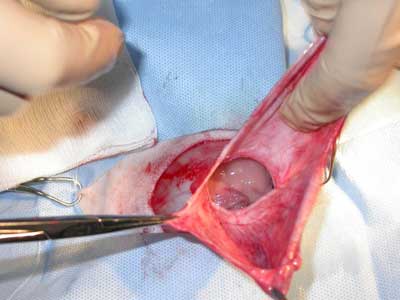 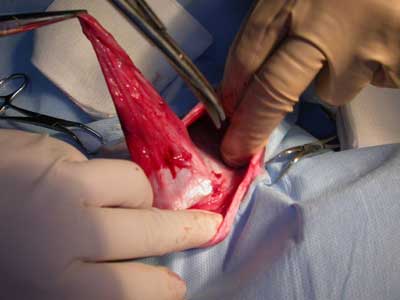 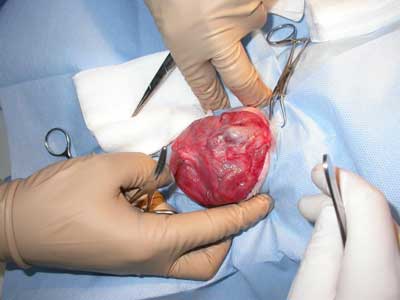 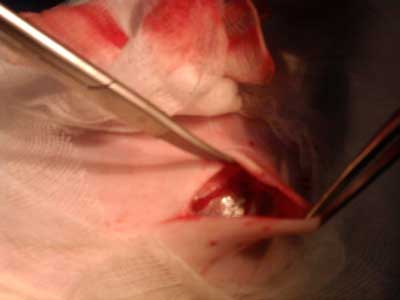 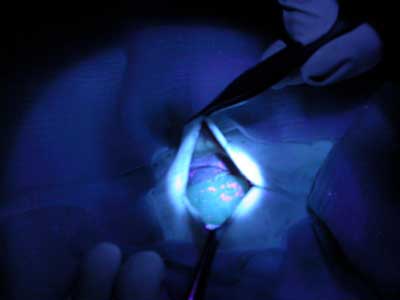 Fig. 5. Groups 1-4 received 5 minutes of irradiation with a UV lamp, which turned the liquid into an elastic, porous sponge.
During stage 3 (tab. 1), the rabbits were sacrificed using 3 ml (480 mg) of Morbital while under anesthesia (medetomidine plus ketamine; Orion Pharma). Postmortem samples were collected from the tissues surrounding the hernia repair site and from the kidneys and the liver.
The biomaterials used in the current study were synthetized from fatty acids present in plant oils. Depending on the type and variety of the material, up to 80% of its mass was derived from renewable sources. The materials 1838-DMA and P1838-UR contain a fatty acid core. PDEGA-UR is a derivative of poly[di(ethylene glycol) adipate], and PEG-DA is diacrylated poly(ethylene glycol) (fig. 6). All of the materials had (meth)acrylic end-groups, making them susceptible to polymerization with UV light. The compositions used for hernia repair also contained the photoinitiator Irgacure 819 (Ciba). The polymers we-re synthesized under mild conditions. The process was carried out in an organic solvent under normal pressure and in the temperature range of 0 to 40°C (1). These biomaterials were created specifically for this project and have not yet been tested in other applications.

Fig. 6. Biochemical structure.
All rabbits were under the constant supervision of a veterinary surgeon. During the study, the following were recorded: vital signs, weight, food consumption, motor activity, the presence of swelling and redness around the wound, and the presence of fluid under the scar. Wound control included observation of both the external side and the peritoneal side of the treated hernia for assessment of hernia relapse. Blood was collected at every stage to measure aspartate transaminase (AST), gamma-glutamyl transferase (GGTP) activity and creatinine concentration.
Samples for histologic evaluation were preserved in freshly prepared 4% paraformaldehyde and then embedded in paraffin. For the purposes of morphological analysis, a slide series was made at 3-5 μm intervals, and the tissues were stained using hematoxylin and eosin. The cross-sections were dyed with the intent of calculating the numbers of various types of cells (fibrocytes, neutrophils, eosinophils, lymphocytes, macrophages). A 10 × eyepiece with a square visor was used for examination. For each animal’s tissue samples, the number of cells was calculated from 50 randomly selected fields; this evaluation was performed using 40 × augmentation and a Zeiss brand microscope. The surface area of each square was 1225 μm2 in size (35 × 35 mm) within the framework of the target. All morphometric measurements were obtained using AxioVision Relative software, version 4.6 (Zeiss, Axioscop, Germany).
Statistical analysis was performed with the Statistica 10 software package; the Shapiro-Wilk and Mann-Whitney tests were used for comparisons, with the level of significance set at p < 0.05. The study was conducted after obtaining the consent of the bioethics committee.
RESULTS
This study provided data drawn from: (1) clinical observation of the rabbits; (2) biochemistry tests; (3) histopathologic evaluation of the kidneys and liver; and (4) histopathologic evaluation of the tissues surrounding the hernia. There were no differences between the groups in motor activity, daily food intake or average weight gain. Would healing was undisturbed in groups 1, 2, 3 and 5, while wound inflammation was observed in group 4. Two deaths, caused by pneumonia and hernia incarceration, were observed during stage 1.
Biochemical tests