INTRODUCTION
Bronchoscopy was introduced to clinical practice in 1897 by Killian. Besides physical and radiological examinations and laboratory tests, it is an important method of diagnosis for respiratory tract diseases in children. In addition to giving a direct view of the respiratory passages, bronchoscopy allows treatment of lesions localized in the lower air passages, to take a tissue sample for histopatology or a sample of secretion for microbiological investigation. It is used in such emergency cases as dyspnoea, respiratory failure, atelectasis, and aspiration of a foreign body. It is also used for repeated examinations to monitor long-standing disorders (e.g. tracheobronchomalacia). The dynamics of increase of the signs often indicate bronchoscopy. The safety of bronchoscopy has markedly increased due to ventilating bronchoscopes, which allow the anaesthetist to ventilate the patient with respiratory and anaesthetic gases during an operation. Bronchoscopies may be performed in the smallest, even premature children, and modern optical equipment has improved the quality of the image and consequently increased the diagnostic value.
METHODS
The aim of this retrospective analysis was to examine the indications, diagnostic yield and associated therapeutic procedures in bronchoscopies performed in the Department of Paediatric Otolaryngology in Warsaw from January 1998 to June 2003. The paper analyses the age and sex of patients, and the number of therapeutic and diagnostic bronchoscopies. Primary recognition and diagnosis as a result of bronchoscopy were compared. Special attention was paid to patients under one month of age, with tracheostomy, or patients suspected of having a foreign body in the air passages. The bronchoscopies were carried out under general anaesthesia in an operating theatre, with co-operation with anaesthetist. All children were hospitalized. A rigid Storz bronchoscope of diameter between 2.5 and 6.0 mm, which enabled ventilation of the patient, was used. Rod lens Hopkin&acutes telescopes were used to improve the view of the respiratory tract, which was recorded on video. Microsurgery tools, argon plasma coagulation or a laser were used in appropriate cases.
MATERIALS AND RESULTS
From January 1998 to June 2003 290 bronchoscopies were performed on a total of 219 children. There were 140 boys (63.9%) and 79 girls (36.1%). The mean age was 2.91 years. The youngest child was 4 days of age and the oldest was 18 years old. Twenty children (6.9%) were under 1 month and 126 (43.5%) under 1 year of age. The age distribution is shown in Table 1 and in Figure 1. Bronchoscopy was carried out once on 192 children (87.7%), among them on 67 girls and 125 boys, twice on 17 children, three times on 6 children, and four times or more on 4 children, among whom were on 12 girls and 15 boys. Thirty-two bronchoscopies were performed on one of the patients with severe papillomatosis of the larynx, trachea and lower respiratory tract and with co-existing cystic diseases of the lungs. The analysis of single and multiple bronchoscopies in relation to number of patients is shown in Table 2. 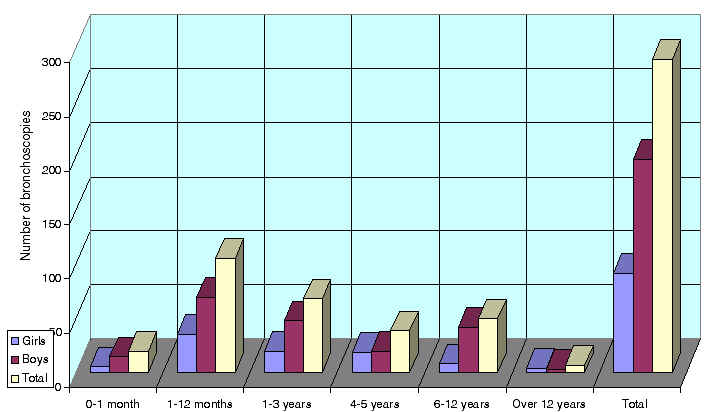 Fig. 1. Age distribution.
Table 1. Age distribution of children.
Table 2. Number of bronchoscopies per patient
Bronchoscopies were carried out not only for patients hospitalized in the ENT Department, but also in children from other hospital departments, including surgical, endocrynological, nephrological, oncological, cardiological and neonatal. Fifty-seven procedures (19.6% of total) were performed in children from other wards, 32 (11%) from the Intensive Care Unit. The data are shown in Table 3.
Table 3.
Bronchoscopies had not only a diagnostic but also a therapeutic value. Therapeutic procedures were performed on 99 cases (34.1%), including removal of the foreign body in 38 cases, papillomatosis of the lower respiratory tract in 35 cases, dilation of laryngeal stenosis using argon plasma coagulation in 13 cases, removal of thick mucus from the bronchial tree in 6 cases, and in 2 cases bronchoscopy was used to place a separator in the lumen of the larynx; for laserotherapy of haeman- gioma in 1 case, to remove a mucus plug from the main bronchus in 2 cases, to remove suppurating granulation tissue from the left main bronchus in 1 case, and to remove granulation tissue from the trachea. In 3 children with increasing dyspnoea, respiratory failure and difficulties in intubation, bronchoscopy was performed to insert a guide which enabled insertion of the intubation tube. These children were found to have laryngeal stenosis and required tracheotomy.