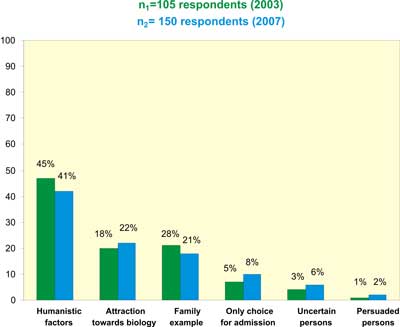 Fig. 1. Career Choice Motivation.
Data show that in 2003 humanistic factors were 4% more dominant than in 2007, while in 2007 attraction towards Biology has become a key factor for more people than in 2003. One possible explanation for this is the fact that the earlier sample group was made up of mainly nursing students, while later – owing to the fact that students could apply for the same basic programme independently of what specialist programme they would choose afterwards – not only future nurses, but also would-be advising psycho-educative professionals (e.g. dieticians) were included in the survey.
Furthermore, family example had a greater influence in 2003, while the number of uncertain persons was much higher in 2007. In this latter group a high percentage (5-8%) of people chose the Faculty of Health Sciences not as their first choice, so they regard their status as temporary. That is, these students were in the Health Sciences Faculty due to the circumstances, and when possible, they would move to their preferred faculty or speciality.