Poniżej zamieściliśmy fragment artykułu. Informacja nt. dostępu do pełnej treści artykułu tutaj
Zamów prenumeratę czasopisma!
© Borgis - New Medicine 4/2004, s. 105-108
Małgorzata Kaczorowska, Lidia Mikołajewska, Agnieszka Woźniak, Juliusz Piotrowski, Zuzanna Łukaszewicz-Moszyńska, Kazimierz Niemczyk
Cochlear implants: qualification procedure in the paediatric population
ENT Department, Medical University of Warsaw, Poland
Head: Prof. Kazimierz Niemczyk MD, PhD
Summary
Children with profound deafness who obtain no benefit from hearing aids become candidates for cochlear implantation. Lack of acoustic stimulation in these patients results in irreversible inhibition of speech development and sound perception abilities. In the present paper the authors discuss the qualification procedure, current indications and contraindications for cochlear implantation in children.
Key words: cochlear implants, candidacy, children.
INTRODUCTION
The prevalence of hearing loss>50 dB hearing level (HL) is about 1:1000 live births (2). In Poland, hearing impairment affects approximately 0.5% to 2% of children under 7 years of age (7).
Most children with impaired hearing can recognize speech through acoustic hearing aids. Nevertheless, some patients with profound deafness obtain no benefit from amplification devices. Additionally, lack of acoustic stimulation results in irreversible inhibition of speech development and sound perception abilities in infants and young children. Cochlear implantation is a well-recognized and effective option in the treatment of profound, bilateral deafness in these patients.
A cochlear implant is an electronic device which provides direct electrical stimulation to the auditory nerve, bypassing the nonfunctional cochlea. It consists of two main elements: an intracochlear electrode and a speech processor. A multi-electrode array is inserted into the cochlea, or, in the case of a malformed labyrinth (common cavity), it is applied to the surface of the inner ear. The speech processor converts sounds into electrical stimuli. CI devices may differ in the number and shape of electrodes, the mode of stimulation and speech-coding methods (7).
Implantation surgery consists of mastoidectomy, posterior tympanotomy to achieve an access to the labyrinth, drilling a cochleostomy and inserting the electrode array into the scala tympani. The operation requires general anesthesia. Four to six weeks after the surgery, the CI device is activated, and the first speech processor parameter fitting is done. 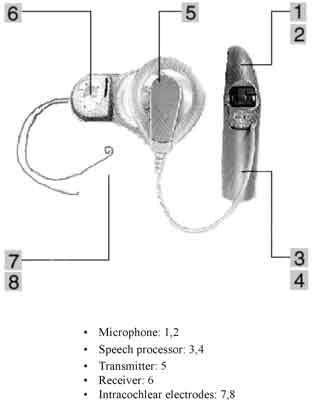 Fig. 1. Cochlear implant: a schematic representation of the device.
THE DIAGNOSIS OF DEAFNESS
The diagnosis of a profound sensorineural hearing loss should be established immediately after its onset. It is believed that congenital deafness should be recognized within the first 6 months of life (2, 7). At that time the child should be supplied with hearing aids. Early identification of children with congenital hearing impairment can be achieved by introducing a neonatal screening programme. The lack of response to environ-mental sounds and inhibition of speech development after the age of 6 months are strongly suggestive of hearing impairment. It is necessary to remember that the parents´ impression that their child does not hear is an indication to perform hearing tests.
Candidacy for CI implantation should be established as early as possible. Implanting young children immediately after the onset of profound hearing impairment enhances their achievements in hearing, speech and language development.
INDICATIONS FOR COCHLEAR IMPLANTATION
A severe-to-profound, bilateral sensorineural hearing loss of cochlear localization, and no or minimal speech perception which benefit from best-fitted hearing aids are an indication for cochlear implantation (6, 7).
QUALIFICATION FOR COCHLEAR IMPLANTATION
Preoperative assessment should entail otolaryn-gological, audiological, language speech pathology and rehabilitation as well as psychological evaluation. Prior to surgery, selected patients may require ophthalmo-logical and neurological consultations.
AUDIOLOGICAL EVALUATION
Audiological examination should address two issues: determination of the degree and type of hearing impairment and evaluation of the benefit from hearing aids.
The hearing status in young children is determined with the following two methods:
1. behavioural assessment
2. objective audiological tests:
– otoacoustic emission (OAEs)
– auditory brain stem response (ABR)
– acoustic immittance tests, including tympanogram and acoustic reflex thresholds.
The behavioural assessment of the hearing status evaluates the infant&acutes response to various types of sounds. The objective audiological tests do not require the child&acutes cooperation: each ear is tested individually, and the degree and localization of hearing impairment is precisely determined.
In older children, additional subjective audiological tests are used:
– play audiometry
– pure tone audiometry (PTA)
– free-field aided PTA
– free-field aided speech audiometry.
The subjective methods require the patient&acutes co-operation. However, in contrast to the objective exami-nations, those are functional tests which assess hearing (not an electrical response of the auditory system to a particular stimulus) (6).
AUDIOLOGICAL INCLUSION CRITERIA FOR COCHLEAR IMPLANTATION
Currently, the candidates for CI are recruited from among the children with a severe-to-profound (>90dB HL) bilateral sensorineural hearing loss of cochlear localization within the speech frequencies of 500-4000Hz. Additionally, no or minimal speech perception benefit obtained from the best-fitted hearing aids should be established (in older children, discrimination in open-set sentence or one-phoneme word tests should be <30%) (6).
Audiological evaluation represents only one stage in the decision-making process.
EVALUATION OF SPEECH PATHOLOGY AND REHABILITATION
Depending on whether the hearing impairment occurred before, during or after learning the language, the terms pre-, peri- or post- lingual deafness are used respectively. The language status correlates with the type of deafness. In children with the post-lingual deafness, the language development has been completed. The peri-lingual hearing impairment is related to different stages of language development and lack of speech automatism. In the pre-lingual deafness, the language has not been yet developed. Therefore, children with pre- and peri-lingually acquired deafness must not only make sense of auditory signals delivered by CI devices, but they must also use this information to develop speech and linguistic skills. Hearing training and speech rehabilitation are necessary conditions to accomplish effective postoperative performance.
Prior to cochlear implantation, the patient&acutes abilities to understand and produce speech are evaluated. The degree of hearing impairment, benefit from hearing aids and lip-reading skills are assessed in all patients. Similarly, the degree of language development is determined.
Pre- and peri- lingually deaf children require additional evaluation of such aspects as:
– development of communication skills
– readiness to communicate
– mode of communication (verbal or visual).