Poniżej zamieściliśmy fragment artykułu. Informacja nt. dostępu do pełnej treści artykułu tutaj
Zamów prenumeratę czasopisma!
© Borgis - Postępy Nauk Medycznych 2/2012, s. 147-151
Magdalena Atarowska, *Włodzimierz Samborski
Fibromialgia – choroba czy zespół bólowy?
Fibromyalgia – a disease or a pain syndrome?**
Department of Rheumatology and Rehabilitation, Poznań University of Medical Science
Head of Department: prof. dr hab. med. Włodzimierz Samborski
Streszczenie
Fibromialgia jest niezapalną chorobą z bólem, cechującą się uogólnionym bólem i rozlaną tkliwością. Głównymi objawami towarzyszącymi są: zmęczenie, zaburzenia snu, bóle głowy i zaburzenia pamięci. Przyczyna choroby jest nieznana i jest przedmiotem wielu hipotez. Rozpoznanie fibromialgii opiera się na różnorodności objawów, w tym nie zapalnym uogólnionym bólem tkanek miękkich. Leczenie chorych na fibromialgię jest trudne i obejmuje stosowanie antydepresantów, leków zmniejszających napięcie mięśni oraz edukację chorego, psychoterapię i fizjoterapię.
Summary
Fibromyalgia is painful, noninflammatory disease characterized by widespread pain and diffuse tenderness. The main symptoms are accompanied by fatigue, sleep disturbances, headaches and memory impairment. Etiology of fibromalgia remains unknown and is a subject of several hypotheses. Diagnosis of fibromyalgia is based on variety of symptoms including noninflammatory generalized pain of the soft tissues. Treatment of patients with fibromyalgia is difficult and includes administration of antidepressants, muscle relaxants as well as education, psychotherapy and physiotherapy.
Słowa kluczowe: fibromialgia, etiopatogeneza, objawy leczenia.
Key words: fibromyalgia, etiopathogenesis, symptoms, management.
Fibromyalgia (FM) belongs to the group of soft tissue rheumatism disorders. That group includes: chronic, systemic arthralgia and myalgia, as well as algesthesia in typical spots called “tender points” (1, 2). Other symptoms possible to appear during the course of the disease are: hypokinesia of muscles and joints, myasthenia gravis, chronic fatigue syndrome and persistent feeling of being shattered, sleep disorder, numerous functional and psychopathological symptoms (3,4). Progression of fibromyalgia and intensification of symptoms vary, therefore the clinical picture of fibromyalgia can be diverse (5).
Frequency of occurrence of fibromyalgia ranges from 2 to 4% of the population. In rheumatological practice that percentage is higher, reaching 7 to 8% (6). Patients who suffer from fibromyalgia are usually white, aged 20 to 50 (7), with female to male ratio from 6:1 to 9:1 (8). The number of cases of fibromyalgia observed by pediatricians is on the increase (9).
There are numerous hypotheses about factors which may trigger occurrence of the disease. Those include sleep disorder in phase IV (NREM – non-rapid eye movement sleep), abnormal serotonin (5-hydroxytryptamine or 5-HT) metabolism and stress. Recently, an essential role has been attributed to the effect of so called “central sensitization”. Other concepts listed by the available literature include: decreased concentration of serum calcitonin, disturbances within the immune system, as well as the hypothalamic-pituitary-adrenal (HPA) axis disorder, which manifests with decreased secretion of cortisol due to corticoliberin stimulation (corticotropin-releasing factor – CRF) or decreased synthesis of the growth hormone (GH) (10). The actual cause remains unexplained.
The most important and distinctive symptom of fibromyalgia is systemic pain. It is chronic with periods of intensification, described by the patients who suffer from it in a very dramatic and evocative way, compared to burning or mutilation of the body. The pain is usually located in the juxtavertebral and large juxtaarticular areas. Intensification of pain depends on various factors which may cause strain on the system. Those factors may be of both external and internal origin (11). External factors include excessive physical effort, viral and bacterial infections, invasive diagnostic procedures, ingested medicine, injuries and traumas, changing environmental conditions. Internal factors are: neurogenic mechanisms, hormonal disorders and hypohydration, psychosocial and personality-related factors, as well as other psychical disorders and disturbances.
Systemic, chronic pain and presence of “tender points” (second distinguishing feature of fibromyalgia) form the diagnostic criteria of the disease (12, 13). The pain should last at least 3 months and be systemic, that means affecting both sides of the body, over and under the thoracic diaphragm, in line with the body axis (in the cervical, thoracic and lumbar regions of the vertebral column or on the anterior surface of the chest. Therefore, this criterion is met if the patient describes pain as located, for example, in the right shoulder, left hip or cervical spine (14).
The second diagnostic criterion, so called “tender points”, are hypersensitivity to pressure applied to specific points corresponding to tendon attachment points or other areas where they are located. There are nearly 100 distinguished spots, however only 20 are the most characteristic, while 18 of them are used for examination and diagnosis (15, 16). Those points are examined by palpation in order to test their sensitivity to pressure. Palpation is conducted with a thumb or index finger, with a pressure force of about 4 kg.
Locations of those points are:
– the occiput – tendon attachments in the occipital area,
– the inferior part of the net – intratransverse process spaces between C5-C7 vertebrae,
– a point on the superior margin of the trapezius muscle, in the middle of the distance between the shoulder and the neck,
– the supraspinatus – a point in the middle of the muscle, above the superior margin of the scapula,
– the second rib – on the superior margin, slightly lateral to the costal cartilage,
– lateral epicondyle – 2 cm distally from the lateral epicondyle of the humerus,
– regio glutealis – the region of superior, exterior quadrant of the gluteal sulcus,
– the greater trochanter – a point positioned behind prominentia trochanterica,
– the knee – the medial region of the knee (fad pad), proximally to the joint gap.
A spot is considered positive if applied pressure causes significant pain, reported by the patient verbally, by a grimace or wince of pain, alternatively by retraction of the extremity (‘a jump sign’) (17). The criterion pertaining to ‘tender points’ is met if at least 11 out of 18 examined points are hypersensitive (fig. 1). 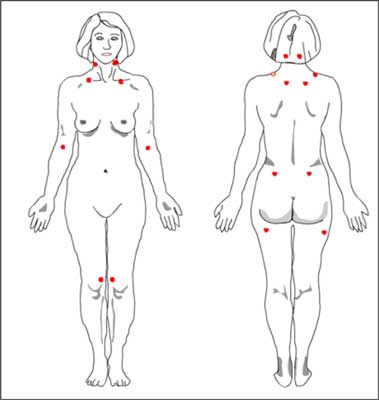 Fig. 1. “Tender points”.
Source: http://www.ucc-ny.com/conditions-treated/fibromyalgia.html
Several symptoms may be observed in the course of FM. Symptoms distinctive for FM include the following:
– hypokinesia of muscles and joints, which increases in the mornings, yet can last for the whole day, affects 80% of patients and requires differentiation from hypokinesia distinctive for other rheumatic diseases,
– weakening of the isometric and isokinetic strength of the muscles (myasthenia gravis) (18), with accompanying decreased endurance, work output and grasping power,
– chronic fatigue syndrome – constant fatugue, weariness, reluctance to any physical effort,
– sleep disorder (19): shallow, short and interrupted sleep with accompanying frequent breaks and, as a consequence, morning weariness and pains in muscles and joints.
Another group of FM symptoms comprises so called autonomic disorders, which are very difficult to substantiate, even with additional tests and object examination.
The most common of those symptoms are:
– feeling of cold hands and feet,
– dryness in the mouth and throat,
– excessive perspiration,
– vertigo,
– positive dermographism,
– headaches and migraines,
– gastrointestinal disorders (irritable bowel syndrome),
– foreign body sensation in the throat,
– sensation of irregular heartbeat (palpitation),
– temporary feeling of lack of air,
– paresthesia,
– dysuria.
Moreover, many neuropsychological disorders may also be observed, like emotional disturbances:
– anxiety,
– emotional stress,
– personality disorders,
– psychasthenia,
– schizophrenia,
– depression.
Neurological symptoms include the following characteristic manifestations:
– vertigo and headaches,
– memory disorders,
– paresthesia,
– tremors and numbness of extremities,
– also dementia, which occurs in the advanced stage of the disease (6, 20).
In recent years, much attention has been drawn to one of the above mentioned, possible etiological causes of the disease, namely the effect of central sensitization. It is described by the following characteristics:
– allodynia – pain due to a stimulus which does not normally provoke pain, like a touch,
– hyperalgesia is an increased sensitivity to a painful stimulus when compared to similar reaction in healthy people.
Patients who suffer from fibromyalgia have a disturbed perception of pain, caused by intensified or prolonged attenuation of nociceptive stimuli, which may be a proof of presence of central sensitization in the course of fibromyalgia. Neuromediators, which have been researched for a long time, play an important role in that process. They participate in the process of conducting pain at the level of neurons of cornu posterius in the spinal cord. They effectuate through pre- and post-synaptic receptors and through some cytokines. The following should be listed: serotonin, substance P, neurokinin, glutamine and norepinephrine. Substance P is most probably responsible for triggering central sensitization. It participates in lowering the synaptic excitability threshold. Then, otherwise physiologically silent interspinal synapses activate and sensitization of the second neuron commences.