INTRODUCTION
Diabetes mellitus is a syndrome of impaired carbohydrate, fat, and protein metabolism caused by either a lack of insulin secretion or decreased sensitivity of the tissue to insulin. For people with insulin-dependent (type 1) diabetes mellitus (IDDM), insulin must be provided from an exogenous source other than the pancreas. People with NIDDM may also end up requiring insulin.
Insulin requiring patients should adjust their insulin dose(s) according to their blood sugars and in relation to various lifestyle events. This represents a daily challenge, as many factors influence glycaemia, such as diet, meal composition, and exercise, as well as stress. Often diabetic patients have developed their skills by some trial-and-error-like training over a long period of time. The task is non-trivial, and many patients would benefit from some sort of educational support. Learning how to modulate insulin therapy in relation to food intake and insulin injections to prevent out-of-target BG deviations would be very useful. However, education of people with diabetes requires a level of clinical expertise which although present in specialised diabetes units, and some general practices with an interest in diabetes, is not always to be found in other sectors of the health service.
The working hypothesis underlying the interactive educational diabetes simulation approach has been that enabling people to try out different therapeutic and dietary alternatives can help them to gain experience in achieving glycaemic control, without the risks of actually experiencing hypoglycaemic or hyperglycaemic episodes. With the simulator, users can specify nearly unlimited numbers of ‘virtual diabetic patients’ and test how different types of treatment, doses and dosing regimens, and even lifestyle (dietary) changes affect the daily BG profile. If a simulated regimen is found unable to keep glycaemia within desired limits, users can try alternative management regimens that seem to improve this daily pattern.
The circulating concentrations of glucose are normally maintained in health within a narrow range by homeostatic control mechanisms involving endocrine hormones, principally insulin and glucagon. Glucose metabolism involves a wide spectrum of transport and metabolic processes some of which are difficult to measure in vivo. Mathematical models, therefore, have the potential to play an important role in the identification and quantification of mechanisms.
Clinically relevant models describing the important metabolite and hormone dynamics in diabetic patients have been developed since the 1960s; for recent reviews see Makroglou (1) and Stahl et al. Model formulations vary in form and detail as primarily determined by their intended use. While the glucoregulatory system involves multiple metabolites and hormones, most existing models focus only on the dynamics of glucose and insulin (2-6). Various approaches have been used including ordinary differential equations, delayed differential equations, partial differential equations, and integro-differential equations (1).
Physiologically based models, with the body compartmentalized into physiological compartments representing the organs and tissues important in terms of glucose homeostasis. (7-9). The Sorensen (7) physiological model comprised a system of 22 mass balance equations, which predict glucose, insulin, and glucagon concentrations in each compartment. Puckett (8) developed a model very similar to Sorensen’s, but did not include glucagon’s effects, and removed all transport terms besides the metabolic sources and sinks. Farmer et al. developed a model framework to describe the biochemical species associated with glucose metabolism (9). Recently the Sorensen model was adapted for NIDDM patients (10). Different models have also been proposed to describe the dynamics of glucose absorption after meals and the absorption of insulin following sc injections of different insulin preparations. Mari et al. (11) proposed another model to describe insulin secretion involving the time delay between the glucose signal and insulin secretion.
Subcutaneous insulin absorption is a complex process which is affected by many factors including tissue blood flow, injection site/depth, injected volume and concentration (12). Insulin absorption from subcutaneous injection or infusion has been widely studied since Binder et al. (12). For a review see Nucci & Cobelli (13). Berger & Rodbard (14) prediction of plasma insulin levels for various insulin preparations. More on physiology and pharmacokinetics, has been described by Mosekilde and colleagues (15). This approach was later modified by Trajanowski et al. (16). The model was also extended to support monomeric insulin analogues (17-18).
The accumulated new knowledge and recent models have allowed the development of a comprehensive educational model of glucose homeostasis which is able to represent conditions typical for both IDDM and NIDDM patients. This article overviews the new model and provides a description of some of the model’s output.
METHODS
Our goal has been to produce an educationally useful model of glucose homeostasis for teaching, self-learning, and demonstration purposes. The model of Sorensen (7) were taken as a starting point for the current work, but reasonable simplifications of the original model have been made. The new model presented here comprises two major sub-models describing glucose and insulin kinetics. These two sub-models are linked by control functions described as algebraic expressions. Figure 1 shows the flow diagram displaying the elements that appear to be essential for a dynamic educational model. The arrows show the blood flow direction and the rectangular blocks represent different compartments. Continuous lines denote fluxes of material and dashed lines denote control signals. 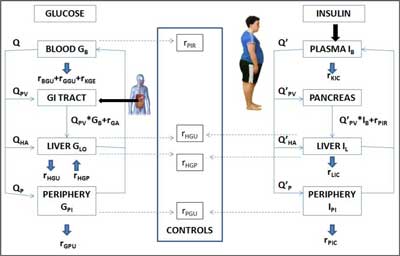