Poniżej zamieściliśmy fragment artykułu. Informacja nt. dostępu do pełnej treści artykułu tutaj
Zamów prenumeratę czasopisma!
© Borgis - New Medicine 1/2003, s. 29-34
Andrzej Brzecki
Establishing a basis for clenbuterol treatment of some diseases of the CNS
Rehabilitation Centre for Disabled Children Strzelin/Mikoszów
Summary
The results of sympathetic cerebropetal blockade in an experimental osmotic and angiogenic oedema influenced by stimulants and anaesthetic factors are presented in illustrations. The results are in accordance with research in recent years, and confirm the reports concerning astrocyte significance in the role of an intermediary in the blood-brain barrier, and the sensibility of brain tissue that is connected with their neurobiological activity. Low responsiveness to stimuli of brain tissue and changes in brain microvessel permeability (e.g. in a coma), result in inhibitory stimulation (GABA-ergic).
The above, as well as other data mentioned, prove that adrenomimetic medicines work neuroprotectively and that they affect the brain&acutes activity which is connected with both local blood flow and neurochemical stimulation. The issue of neuroprotective factors has been explained, and the significance of adrenomimetic-clenbuterol which stimulates beta2-adrenoreceptors of the transverse striated muscles, and protects the brain by means of brain - derived neurothropic factors (BDNF) has been emphasised. On this basis, we have put forward a hypothesis about the treatment neuro-degenerative CNS illnesses. The significance of adrenergic neurotransmitters and other stimulators of the central regulation, and some possibilities for administration of beta2-adrenomimetics in some motor disturbances of the CNS has been discussed, and the usefulness of application of clenbuterol in cerebral palsy in children has been motivated. On this basis, clenbuterol has been used in treatment in the Rehabilitation Centre in Mikoszów near Strzelin. It has turned out that this well known long term medicine in asthma treatment of both children and adults showing practically no side effects is useful in treating children for some motor disturbances of the central nervous system, in particular various types of motor hyperexcitability, and motor paresis.
Key words: experimental brain oedema – stimulant and inhibitory neurotransmitters, neuroprotective factors in brain tissue, treatment of CNS diseases with clenbuterol.

Experimental research into oedema of the brain, caused by some nervous factors, and indications for the administration of clenbuterol in some CNS disorders, particularly cerebral palsy
The presence of autonomic peripheral structures which are controlled through the truncus sympathicus is significant in the for structural organisation of the sympathetic nervous system. The sympathetic postganglionic fibres of the periarterial carotid plexus arise from the rostral segment of the sympathetic trunk, and in particular from the superior cervical ganglion. The final branching of carotid plexus takes place between adventitia and media (33), and supplies the brain as well as the hypophysis and pineal gland. An adrenergic neuro-transmitters, and probably endorphin peptide neurotransmitters, encephalines, and other substances secreted from the ends of sympathetic fibres regulate the permeability of the capillary endothelium (6), and the transport via the blood-brain barrier by means of astrocytes which connect the capillary walls together with neurocytes. Astrocytes show other functions as well, e.g. they absorb surplus K+ ions and supply neurocytes with glucose, prevent diffusion of neurotransmitters outside the synaptic fissure, etc. (25). An adrenergic neuro-transmitter from the ends of symphatic fibres reacts with the adrenergic receptors of the pinealocytes, and stimulates the synthesis of melatonin (30). It is not yet known whether peripheral impulses, which is the brain&acutes sympathetic stimulation coming from the external carotid plexus, predominates over central adrenergic stimulation, which has its source in the neurons of the locus coeruleus this forming a centre which supplies the whole brain (23).
In aqueous oedema (angiogenic and osmotic), the results of the disconnection of the internal carotid plexus have been observed along with the plexus&acutes reaction to nervous tissue under stimulation and/or anaesthesia (9). After craniotomy and incision of the dura mater, one can observe swollen brain tissue&acutes protruding from below the meninx, and take specimen of living brain tissue for analysis. A model of watery intoxication affected an experimental animal relatively slightly, (the majority managing to survive). The effects obtained were recurrent, and it was investigate some minor morphological changes in the capillaries and nervous tissue (phase-contrast microscopy) (figures 1-9). 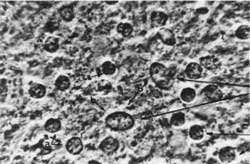 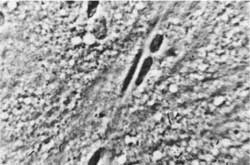 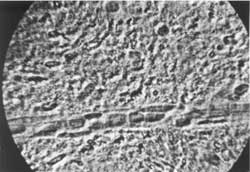 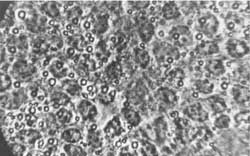 Fig. 4. Border of cortex with white substance. On the left are visible oligodendrocytes and neurocytes on the right. 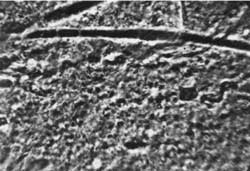 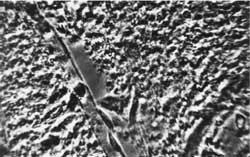 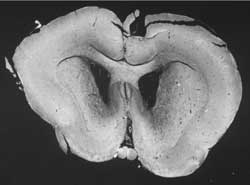 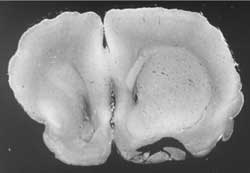 Fig. 8 & 9. Asymetrical brain oedema, more on the right, i.e. after truncus sympathicus blockade.
Both brain stimulation by means of strychnine and medicines which stimulate the sympathetic system (induced intrathecally or intraperitonealy), reduced swelling. The onset of oedema occured later on and was less prominent. Urethane anaesthesia contributed to the formation of swelling. Exclusion of the internal carotid plexus caused substantiall increase in swelling on that side. The microphotographs have not yet been published, but illustrate the following conclusions – "Sympathetic stimulation makes the dynamics of both growth and extent of oedema difficult, while its disconnection gives facilities for the dynamics of oedema”. This capability probably influences the metabolism of the nervous cells.
The blood-brain barrier and astrocytes which mediate between capillaries and neurocytes take part in the development of brain oedema. Conclusions quoted from a report dated 1965 are still current.
Ract et al. (35) demonstrated that lesion of the blood-brain barrier after a serious brain injury is related to a deficiency in catecholamines (dopamine and norepinephrine), and brings about intensified permeability of the capillaries. The neuroprotective action of adrenergic substances is connected with increased oxygen consumption of nervous tissue, blood flow and biochemical stimulation of brain tissue which ensures an increase in defensive properties this cells and decrease in oedema.
Glutamic acid, a basic stimulating transmitter, which appears in substantially after brain injury, can also produce an oedematogenic effect, since it leads to increased permeability of capillary endothelium, glia cells, and neurocytes. Glutamic acid can be found in quantity in cerebrospinal fluid from patients who suffer from acute viral meningitis, myelopathy, or acute disseminated sclerosis, that is to say all diseases accompanied by oedema (40).
Maxwell et al. (31) proved that swollen astrocytes, which limit glutamate diffusion from the site of an injury (traumatic oedema) protect neurocytes from swelling brought about by a surplus of glutamine irritation. In other words, astrocytes create a barrier which protects neurocytes from swelling.
A surplus of glutamine irritation is not advisable, as it may produce an toxic effect and cell necrosis. A surplus of catecholamine causes haemorrhage. Hiperammonaemia can lead to brain swelling after conquering the swollen astrocytes and serotoninergic activity (2) has been overcome.
Much research in recent years has indicated a progressing permeability of the blood-brain barrier, brain swelling during hypoxaemia, coma, poisoning, after brain injury. In such circumstances GABA-ergic stimulation prevails, and trofic adrenergic and glutaminergic1 stimulation are reduced.
Borges et al. (7) proved that the adrenergic central nervous system effectively reduced angiogenic brain swelling. In experiments are used beta2-adrenoceptor agonist, that is to say clenbuterol which inhibits the permeation of Evans´ blue and water through vessel walls and `saved´ (i.e. restrained) the development of brain swelling during the experiment.
The following results confirm the conclusions of an experiment carried out in 1965, others experiments emphasise a decrease in capillary permeability under the influence of adrenergic medicine, a specially beta2-adrenoreceptors, as proved in an vitro experiment by Allen and Coleman (1).
Beaumont et al. (5) revealed that, in increasing intracranial pressure, dopamine can normalize brain blood flow, but in arterial hypertension it raises the permeability of the blood-brain barrier, in contrast to epinephrine which lowers the permeability (42).
Researches by Ito et al. (24) on the morphology of swelling after an experimental injury revealed by MRI and diffusion-weighted magnetic resonance imaging (DWI), the substantial significance of arterial hypertension and hypoxaemia, which initially cause, the development of the cytotoxic swelling accompanied by a surplus of dopamine. Then it occurs to restriction of tissue mediators (endothelina, acidosis, nitrogen oxide (NO) (41). One has demonstrated (19) that all the factors mentioned together with glutamic acid have an impact on brain activity connected with regional blood flow (rCBF) which is of great significance to the functioning condition of the brain tissue&acutes connected with the modulation of neurotransmitters.
Glutamic acid – a stimulating neurotransmitter, as it is known, works in the opposite way from inhibitory transmitter, such as is to say gaba-aminobutyric acid (GABA). An increase of extracellular glutamate is characteristic of people with severe brain injury (44), and microglia is the restraining factor responsible for its concentration (29). Lowering the glutamate concentration and NaCl channel blocking decreases damage to the brain caused by oedema and can therefore give indication concerning cure. Taurine&acutes concentration is said to be an indicator of an induced swelling (in vitro experiment). The presence of taurine in cerebrospinal fluid may be useable as an indicator of the progress of therapy in cases of brain damage with swelling, caused by trauma (40).
Beta2-adrenomimetics, especially clenbuterol
Among numerous scientific experiments in the recent years, it has been revealed that clenbuterol, by way of blood, stimulates adrenergic receptors of transversely striped muscles, and in this way the mass of the muscles and their power can be increased, and neuropathic atrophy regressed and the CNS can be influenced (vide literature quoted in Kobel-Buys and Buys), (27). Clenbuterol shows an anticonvulsant effect(17) and corticosterone inhibits an adrenergic response of clenbuterol (10).
Propranolol – an antagonist of beta-adrenergic receptors - reduces clenbuterol&acutes neuroprotective effect, whereas a fall in propranolol restores clenbuterol&acutes activity. In the experiment this means that it works due to activation of the beta-adrenergic receptor (39).