Introduction
The parotid glands should be impalpable in children. Noticeable facial asymmetry and unilateral or bilateral oedema are usually associated with parotid pathology. The most common causes include infection, autoimmune or lymphoproliferative diseases, duct obstruction, as well as benign or malignant tumours. Rapidly growing oedema is a typical outcome of viral infection or chronic, recurrent parotitis.
The term “pneumoparotid” refers to the presence of air in either the parotid gland or the Stensen’s duct (1, 2). Pneumoparotiditis is a parotitis secondary to a retrograde pathogen invasion through the duct orifice, which is dilated as a result of barotrauma (3). The presence of pneumoparotid in the absence of pneumoparotiditis is unlikely due to the diversity of oral flora. The co-existence of secondary inflammatory oedema often leads to a misdiagnosis of simple parotitis.
Patients at risk of pneumoparotitis include wind instrument players and adults with mental disorders (4, 5). Most patients are aware of their ability to inflate the gland. Patients with unintentional parotid gland inflation pose a greater diagnostic challenge.
Case report
A 12.5-year-old boy was admitted in an emergency to the Department of Paediatric Otolaryngology, Medical University of Warsaw, due to a swelling in the right cheek. About 1.5 days earlier, he completed a 7-day course of oral clindamycin for parotitis. The diagnosis and the treatment were suggested in the Department of Otolaryngology of another centre, where the patient had stayed for 5 days prior to outpatient treatment. At that time, salivary gland ultrasound showed inflammation of the gland and a cyst in the mandibular angle. Head CT was performed (fig. 1, 2). 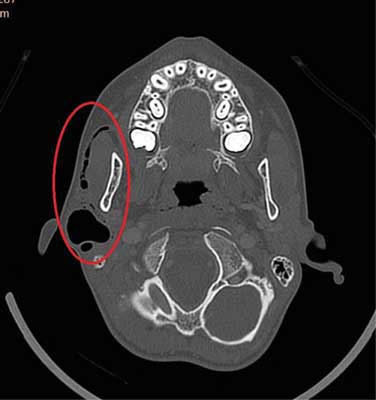 Fig. 1. CT in a patient with pneumoparotid. A dilated Stensen’s duct and a pneumatocele in its distal part may be seen on the right 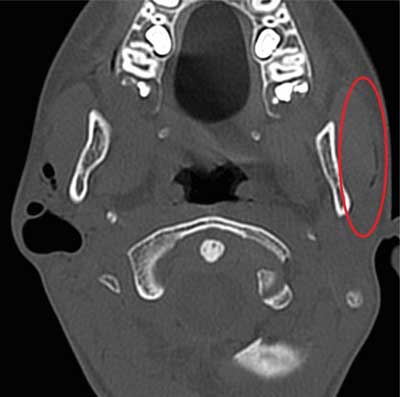 Fig. 2. CT in a patient with pneumoparotid. A dilated Stensen’s duct on the left
The findings were as follows: “A 23 mm space filled with air in the right parotid region, below the external auditory canal, in the projection of the salivary gland; air is also present in the salivary ducts of the right parotid gland and the parotid duct. On the left, air is present in the parotid duct and salivary ducts within the gland. Cervical lymphadenopathy up to 21 mm. Positive intra-oral pressure causes dilation of both the salivary ducts and the right-sided gas-filled space. The CT image most likely corresponds to a cyst drained through a fistula to salivary ducts, with a leaking orifice and air reflux into the salivary glands”. Buccal oedema located directly under the right ear lobe again increased rapidly, causing moderate pain in the child. Inflammatory markers on admission were normal: CRP < 0.5, WBC 8.59 thous., LYMF 34.3% (N: 24.7-56.0%), NEUT 56.3% (N: 43-65%), MONO 6.6% (N: 4.4-12.3), EOSINO 2.4% (N: 0.0-4.4%). Body temperature was 36.6°C. Otolaryngological examination showed no evacuation of pathological content from the dilated orifice of the gland, but only normal secretion containing air bubbles. Emergency ultrasound findings were as follows: “Both parotid glands are not enlarged, but show inhomogeneous parenchymal echostructure, without any focal lesions. A slight amount of air in the left parotid duct; a large amount of air and a small amount of fluid (about 6-5 cm) in the right parotid gland. Slightly increased vascularity in the right parotid gland. Mild reactive lymphadenopathy up to approx. 24 x 7 mm at both submandibular areas. No oedema of the surrounding tissue”. Based on the clinical picture and medical history, IV Amoxiclav was included by the doctor on duty. The boy admitted that during the past months he “played” by inflating both parotid glands. Initially, the dilation of the distal end of the duct was unnoticeable, and the resistance during gland insufflation was high. With time, however, the boy was able to develop a 27-mm-long pneumatocele. He also reported that he derived much joy from the “bubbling sensation” during air evacuation.
According to the patient’s mother, the boy had a history of 2 episodes of right-sided parotitis. Purulent discharge from the Stensen’s duct was observed each time. Both infections were developed in the last 6 months.
At the time of admission, the patient was under outpatient immunological, gastroenterological and cardiological care. He complained of a few-minute episodes of intra-abdominal pain unrelated to food ingestion for several years. His mother confirmed the lack of appetite, extended chewing time and difficulties swallowing solid foods. Percentile charts were difficult to develop due to the lack of measurements. At examination, the boy’s body weight of 31 kg corresponded to the third percentile (25th percentile at 5 years old), and his height of 149 cm corresponded to the 25th percentile (27th at 5 years old). The mother reported recurrent URTIs, allergy (no allergen test or treatment), gastroesophageal reflux disease (no medical records or treatment) and excluded celiac disease (again no records). Family history additionally revealed that the boy’s father was diagnosed with and treated for Barrett’s oesophagus.
Laboratory tests were run at the Department to evaluate total IgE, serum and urine amylase, anti-TPO, TSH, ANA, ANCA, Ig A, Ig M, Ig G, EBV, CMV, RF, CRP, and complete blood cell count. Abnormal findings were reported for total IgE ? 163 kU/L (N: 0-100). The above mentioned ultrasound was performed.
The patient was qualified for bilateral sialography. The procedure was performed under local anaesthesia: “Contrast agent (Imeron) was administered through a catheter inserted into the right parotid duct ? the dilated parotid duct was filled; several smaller spaces in the distal part of the duct and one significantly larger space were also filled. Contrast agent evacuation from these spaces was spontaneous (fig. 3). This was followed by contrast agent (Imeron) administration through a catheter inserted into the left parotid duct ? the parotid duct, which gave off branches in its distal dilated part, was filled with contrast agent (fig. 4)”. 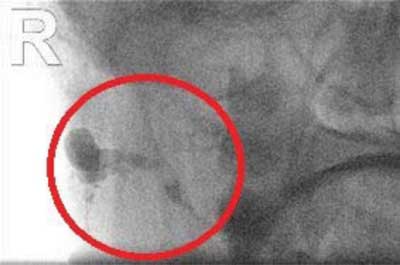 Fig. 3. Right parotid fistulography. Dilated duct and a contrast-enhanced cistern at its end are seen 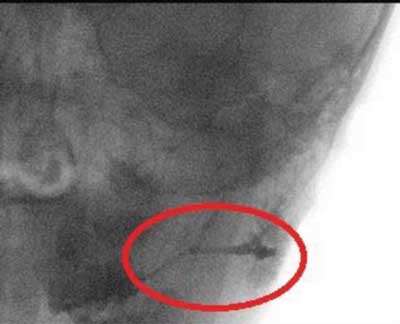