Zamów prenumeratę czasopisma!
© Borgis - New Medicine 4/2009, s. 100-101
*Małgorzata Dębska
A PHARYNGEAL TUMOUR IN A 13-DAY-OLD NEONATE – CASE REPORT
Department of Paediatric Otorhinolaryngology, Medical University of Warsaw, Poland
Head of Department: Prof. Mieczysław Chmielik, MD, PhD
Summary
A case of a pharyngeal tumour in a 13-day-old neonate was diagnosed. The asymptomatic tumour had been noticed by the parents in the oral cavity of their newborn child. The article describes the diagnostic and treatment of the lesion. Note that the patient was very young and the tumour was asymptomatic despite the lesion&acutes considerable size.
Key words: pharyngeal tumour, neonate.
INTRODUCTION
Tumorous lesions of the pharynx in neonates are rare. New-born children usually present with teratoma of the pharynx, less frequently with papilloma, cysts, angioma or fibroma. Malignant tumours that occur in neonates are rhabdomyosarcoma. Due to their localisation, pharyngeal tumours can cause swallowing problems and respiratory failure. Diagnostics consists of: history, paediatric and laryngological physical examination, laboratory tests (alphaphetoprotein, LDH, ferritin, basic examination), imaging examination: pharynx and neck ultrasound, CT, MRI, chest X-ray and ultrasound of the abdominal cavity in order to rule out tumorous lesions in other organs. Pharyngeal tumours are treated surgically, the resection is either curative or performed to obtain a sample for histological examination (in case of maiming surgery). In case of some malignant lesions, in order to reduce the tumour burden and the scope of the surgical intervention, chemotherapy is administered before a surgical intervention.
CASE STUDY
A 13-day-old girl W.B. (patient history number: 09-556; 10 points in the Apgar score, third pregnancy and second delivery, born through cesarean section) was admitted to the Clinic of Paediatric Laryngology on April 24th, 2009 due to a tumorous lesion in the oral cavity (Fig. 1). The lesion had been discovered by the parents when the patient had spitted up after feeding. The neonate hadn&acutet had any problems with suckling and swallowing and it had gained weight. 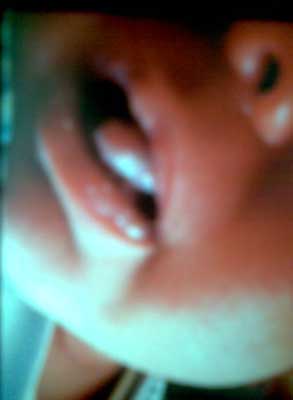 Fig. 1. The tumour in the oral cavity.
There was no respiratory failure; no dispnea, stridor and hoarseness were diagnosed; blood oxygenation, measured in the hospital, was in a normal range; laryngological examination was normal: no tumorous lesion was found in the oral cavity and in the pharynx; paediatric examination was normal (aside from clubfoot); laboratory results were normal for a baby this age; ultrasound of the neck showed a 5 cm long polypoid lesion in the esophagus, displacing the trachea; barium examination of the esophagus showed that the contrast passed easily through the esophagus, and the baby did not choke; an abnormal mass with smooth margins, which dilated the lumen of the esophagus, was observed in the lumen of the cervical part of the esophagus; the mass could reach higher, to the lower part of the pharynx; the visible part of the tracheal lumen was compressed and the mass in the cervical part of the esophagus was approximately 23 mm x 13 mm in size. Symptoms resembled a double esophagus; chest and neck CT with contrast showed an abnormal mass in the upper part of the esophagus to the Th1 level. It filled up the lumen of the esophagus and manifested a homogeneous contrast enhancement. The lesion was approximately 15 mm x 30 mm in size. The lumen of the esophagus under the lesion seemed normal. The trachea (normal in width) was displaced by the lesion. Organs in the thorax and the nasopharynx were normal.
The patient underwent endoscopy of the pharynx, larynx and esophagus, as well as a surgical procedure, performed on April 27th, 2009. Anesthesia was performed by dr U. Fritz. The larynx, the lower part of the pharynx and the esophagus appeared normal during the examination. A tumorous lesion had a long stalk attached to the left palatopharyngeal arch. During the examination the lesion was localised in the nasopharynx. It could reach the middle part of the pharynx; together with the stalk it was 40 mm long. After having cauterised the point of attachment, the stalk was cut off. Bleeding was low, the post-operative period passed without complications and the operation site healed normally. The patient was hospitalised for 3 days after the surgery. Histological examination (dr J. Małdyk) revealed angiofibroma. Four months after the surgery no lesion growth has been observed.
Piśmiennictwo
1. Postępy w rozpoznawaniu i leczeniu nowotworów u dzieci J.Brożek (red.). PZWL 1981. 2. Otolaryngologia dziecięca. M. Chmielik (red.) PZWL 2001. 3. Otolaryngologia dziecięca. D. Gryczyńska (red.). á-Medica Press 2007. 4. Patology of the Head and Neck Cardesa A. Slootweg P.J. Springer_Verlag Berlin-Heidelberg 2006. 5. Bielicka A, Zawadzka-Głos L, Chmielik M, and al.: Teratomas of the nasopharynx in children. A report of the of the three cases. New Medicine; No 3/2006.
Adres do korespondencji:
*Małgorzata Dębska
Klinika Otolaryngologii Dziecięcej WUM
00-576 Warszawa, ul. Marszałkowska 24
tel./fax: + 48 22 628 05 84
e-mail: laryngologia@litewska.edu.pl