Poniżej zamieściliśmy fragment artykułu. Informacja nt. dostępu do pełnej treści artykułu tutaj
Zamów prenumeratę czasopisma!
Księgarnia Borgis / dział medyczny
© Borgis - Nowa Stomatologia 3/2004, s. 103-107
Dorota Stańczak-Sionek, Maria Szpringer-Nodzak, Aleksander Remiszewski
Usage of the Clinical Examination of Children and their Mothers to Assess Risk of Dental Caries at Children up to Three Years of Age
Zastosowanie badania klinicznego dziecka i matki do określania ryzyka próchnicy u dzieci do trzeciego roku życia
Pediatric Dentistry Department, Medical University of Warsaw
Head of the Department Aleksander Remiszewski DDS, pHD
Early childhood caries poses a very difficult treatment problem for pediatric dentistry. In Poland, a frequency of caries in children aged three years and under has always been higher than in Western European countries. Nation wide epidemiological studies performed in 1992/93 showed caries to occur in 14.1% of children aged 3 years and under, and in 36-month-old children caries prevalence reached 48.65, i.e. nearly every second 3-year-old child had dental caries. The first cavities were already found in children under one year old (1, 2).
In 1975 Martheler described the phenomenon of „polarization” of caries in small children, which means that there is a noticeable difference in dental health between children with and without caries (3). In Poland in the former group, it is mainly early childhood caries (ECC) which is observed, characterized by a marked severity of the disease process and high caries increment. 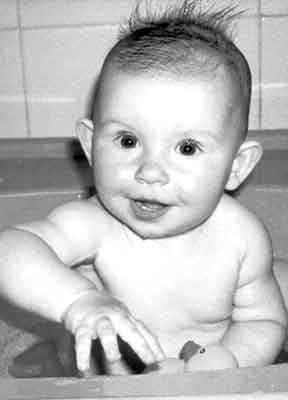 Polarization can also be observed in other countries such as Bulgaria (4), and in countries with a lower fre- quency of caries (Scandinavian countries) (3).
Caries in young children is therefore a problem, even in highly developed countries.
The treatment of children with ECC is difficult and costly, and often requires to be performed under general anesthesia. Postponement or lack of treatment quickly leads to complications and has an unfavorable effect on both the future state of dentition and the general development of the child (5, 6, 7, 8, 9, 10).
Numerous authors have addressed the problem of the significance of the prevention of early caries, both at an individual and a population level, and its medical and financial implications (11, 12, 13, 14, 15, 16, 17, 18, 19, 20).
A main role in the assessment of caries risk is played by evaluation of dental health, taking in to consideration in particular the number of cavities, as well as the number of teeth (surfaces) restored and extracted due to complication of caries.
A number of authors have underlined the usefulness of a clinical dental examination in determining the risk of future caries in children (21, 22, 23, 24, 25, 26, 27). According to some reports, of greater significance in determining caries risk is the number of initial and superficial caries lesions (22, 28).
More recently, authors have drawn attention to a problem of infection of child&acutes oral cavity with maternal oral bacteria (10, 29). Mother&acutes dental health therefore influences the occurrence of early childhood caries, as has been underlined by many authors (30, 31, 32).
AIM
This publication is a part of a larger Project concerning determination of caries risk in children aged 3 years and under using questionnaires and clinical and bacteriological examinations.
The aim of the present paper is to determine the efficacy of clinical examination of one-year-old children and their mothers in determining the risk for caries over the next two years.
MATERIAL AND METHODS
The study material comprised of 122 children be- tween the ages of 12 and 15 months, and 120 mothers. The group of children included 64 boys and 58 girls (Fig. 1). 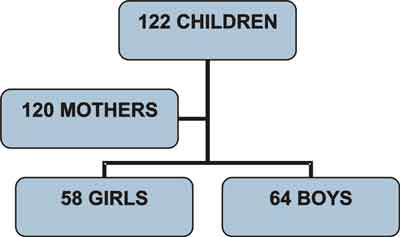