INTRODUCTION
Lipoma is the most common benign neoplasm in the human body which develops from the adipose tissue. These tumors are under-diagnosed and ignored by doctors because its benign character. Lipomas are the most frequent found in middle age and in the male population. Many lipomas are small with diameters of about 1-3 cm. The term “giant lipoma” is used for tumors whose size exceeds 10 cm.
The author of this article report the rare case of a giant spermatic cord lipoma that was referred as a right inguinal hernia and found in PubMed Database several articles relating to that described problem (1, 2).
CASE REPORT
A 52-year-old white man referred to the department due to a giant tumor on the right side of the inguinal area. The tumor had been steadily increased in size from 43 months. The patient has reported pain in this region. He had no any other symptoms, such as bowel- or urinary-altered habitus, previous surgeries, previous hospital admission or drug abuse.
On physical examination, in the right inguinal area a giant tumor was palpable. The size of the tumor during examination was 14 x 8 cm (fig. 1). Testicles were painless and normal in size and consistency. The abdominal examination was also normal. 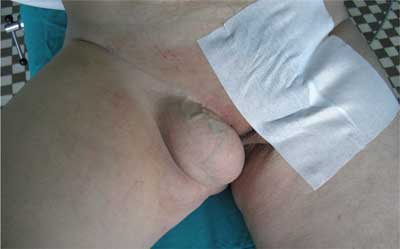 Fig. 1. Voluminous of the lipoma mass in the right inguinal region.
An ultrasound was performed at another hospital. In the ultrasound examination there was described a tumor which probably corresponds to the hernia in which a part of a omentum major and a part of bowel intestine is located. There was unable to view images from this examination.
The patient was taken to the operating room for a standard Lichtenstein hernia repair due to right inguinal hernia (fig. 2, 3). During surgical exploration of the inguinal area, there was no hernia but there was diagnosed a giant lipoma of the spermatic cord measuring 15 cm × 9 cm × 7 cm (fig. 4). 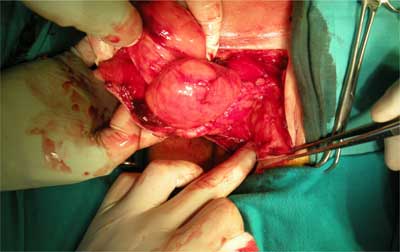 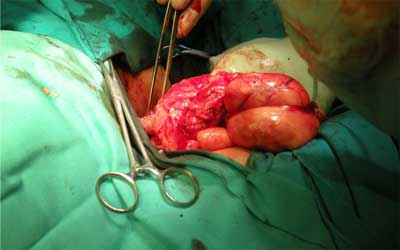 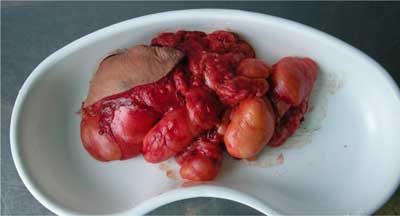 Fig. 4. The macroscopic appearance of an encapsulated fat tissue neoplasm.