INTRODUCTION
Lipoma is the most common benign neoplasm in the human body which develops from the adipose tissue. It is estimated that about one percent of the general population has a lipoma. Lipomas are the most frequent found in middle age. Many lipomas are small with diameters of about 1-3 cm, but can enlarge to sizes greater than ten centimeters and are named “giant lipomas”. Giant lipomas located especially in the extremities can cause compression of the vein and cause chronic venous insufficiency.
The authors of this article report a rare case of giant lipoma which caused femoral venous obstruction syndrome due to compression. The authors found in PubMed Database several articles relating to that described problem (1-4).
CASE REPORT
The authors report the case of a 55-year-old woman who was referred to their department due to the presence of a large mass which was located on the right thigh. The tumor had been steadily increased in size from six months. The patient has reported pain, functional impairment and edema of the right leg for six months. There was no past history of deep vein thrombosis, surgery or trauma. On physical examination, the right limb had edema with early skin changes and in the medial-posterior part of the thigh was palpable giant tumor.
Doppler sonography was performed and integrated with MR. There was no old or new deep vein thrombosis or venous reflux and no lymphadenopathy. The mass of tumor caused compressing the femoral vein and venous obstruction. The MR scan showed a large sharply demarcated change of the focal length in the back of the thigh. The tumor lay between the great adductor muscle from the front and semitendinosus, semimembranosus and long head of the biceps thighs from behind. The tumor caused compression of the femoral vein and nerve (fig. 1). The cross sections of the tumor size was 10 x 5.5 cm, and 16 cm long axis (fig. 2). 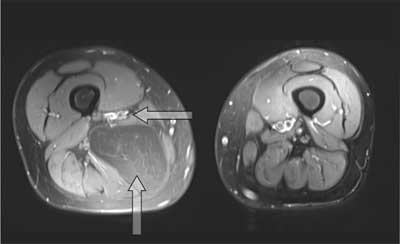 Fig. 1. The MR scan presents compression of the femoral vein and nerve caused by giant lipoma. 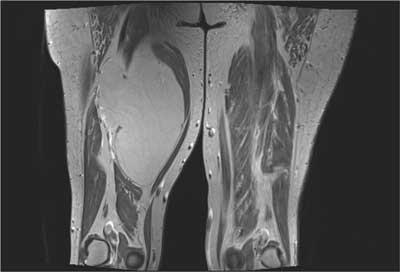