Poniżej zamieściliśmy fragment artykułu. Informacja nt. dostępu do pełnej treści artykułu tutaj
Zamów prenumeratę czasopisma!
© Borgis - New Medicine 4/2014, s. 142-145
*Konrad Wroński1,2
Medical error in gallbladder cancer treatment – case report, review of literature and legal analysis of the situation
1Department of Oncology, Faculty of Medicine, University of Warmia and Mazury, Olsztyn, Poland
Head of Department: prof. Sergiusz Nawrocki, MD, PhD
2Department of Surgical Oncology, Hospital Ministry of Internal Affairs with Warmia and Mazury Oncology Centre, Olsztyn, Poland
Head of Department: Andrzej Lachowski, MD
Summary
Gallbladder carcinoma is a highly aggressive malignancy. This neoplasm was first time described in 1777. More than 230 years later, the prognosis in gallbladder carcinoma is poor. Appropriate treatment of patients may help to improve the five year survival rate of patients.
Instruments recorded in national and international acts protect the patient against medical mistakes. National legislation requires the physician responsible for providing medical benefits corresponding to current medical knowledge and perform their work with due diligence. It is now one of the most important rights of the patient, which is often not observed by medical personnel.
The author of this article presented the case of a 73-year-old Caucasian woman who was admitted to the hospital because of recurrence of gallbladder carcinoma. Since 11-months of the diagnosis gallbladder cancer, the patient was referred to a specialist outpatient for further oncological treatment. Patient for 11 months were treated conservatively, contrary to current standards of conduct in this stage of the cancer, the implementation of imaging studies, instead of surgery. After 11 months there was observed icterus, weakness and malaise. In CT scan there was recurrence of neoplasm disease. In this article the author present the law consequences that may threaten a doctor who does not treat patient with current medical knowledge.
Key words: medical mistake, gallbladder neoplasm, treatment, surgery.

INTRODUCTION
Galbladder carcinoma is a highly aggressive malignancy (1). This neoplasm was first time described in 1777 (2). More than 230 years later, the prognosis in gallbladder carcinoma is poor (3). Appropriate treatment of patients may help to improve the five year survival rate of patients.
Instruments recorded in national and international acts protect the patient against medical mistakes (4-7). National legislation requires the physician responsible for providing medical benefits corresponding to current medical knowledge and perform their work with due diligence (5, 6). It is now one of the most important rights of the patient, which is often not observed by medical personnel.
CASE REPORT
A 73-year-old Caucasian woman was referred to the Department of Surgical Oncology due to icterus caused by recurrence of gallbladder carcinoma in computer tomography scan (fig. 1). Total bilirubin was 16,47 mg%. The patient suffered from weakness and malaise. The computed tomography scan revealed a significant degree of expansion of intrahepatic bile ducts. In the segment 5 and 6 of the liver in the vicinity of the lodge after the cut gallbladder, revealed poorly demarcated infiltration area measuring approximately 55 x 42 mm (fig. 1). In the 7th liver segment revealed a focal lesion of the characteristics of cysts with a diameter of 19 mm. The common bile duct was extended to 23 mm. Duodenal wall was thickened. Pancreas was without perceptible lesions and expand pancreatic duct. Spleen, adrenals and right kidney were without lesions. Left kidney was small and cirrhotic. Para-aortic lymph node size up to 16 mm. 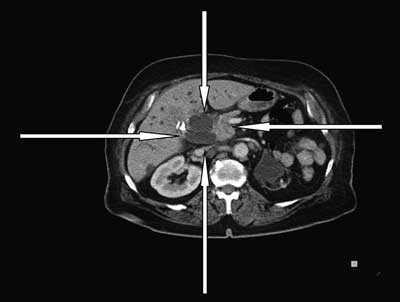 Figure 1. The computed tomography scan showing neoplasm tumor in the lodge after removed gallbladder.
The patient suffered from abdominal pain located in the right hypochondrium. Physical examination showed palpable tumor located in this area. There were no peritoneal symptoms. The external genitalia and uterine cervix were normal.
She had no any other symptoms, there was no history of weight loss and loss of appetite. The patient was treated chronically due to arterial hypertension. She had cholecystectomy 11 months earlier in the Department of General Surgery one of the hospital in the Warmia and Mazury district. Histopathological examination showed adenocarcinoma cells in the wall of gallbladder. It was stage 2 neoplasm disease – perimuscular-tissue invasion (pT2N0M0). General surgeons sent the patient for further treatment to the oncological center. The patient was treated in the outpatient room by consultant of general and oncological surgery. Within 11 months the patient was performed two times ultrasound and once computer tomography. In the computer tomography 1 month after surgery there was no recurrence of neoplasm disease. The patient was not refer to surgery from outpatient room.
Blood test showed elevated levels of the alanine transaminase – 93 U/l (N: 2-33 U/l), the aspartate aminotransferase – 141 U/l (N: 2-32 U/l) and the alkalin phosphatase 418 U/l (N: 35-104 U/l). The rest blood tests were in the normal range.
After watching the CT scans, the case was inoperable. The patient underwent ERCP with incision Vaters papilla and the assumed of the prosthesis to the common bile duct. The patient felt good after treatment and the total bilirubin level gradually decrease. In the 7th day after the ERCP total bilirubin level was 4.95 mg%. The patient was discharged home in the 8th day after treatment in optimal general condition and directed to further palliative treatment to the Department of Chemotherapy.
DISCUSSION
Gallbladder carcinoma is the most frequent tumor of the extrahepatic biliary tract and the fourth commonest malignant neoplasm located in the upper gastrointestinal tract (8, 9). The most frequent histopathologic type of gallbladder carcinoma is adenocarcinoma – 80% of all cases (8, 9).
Patients who had diagnosed „incidental” gallbladder carcinoma on pathological examination of cholecystectomy specimen have significant better prognosis of 5-year survival than patients whose gallbladder cancer was diagnosed preoperatively or at the time of cholecystectomy (8). Patients who undergo radical re-resection after cholecystectomy („incidental” gallbladder carcinoma) have 5-year survival 35-38%, than those who did not undergo radical re-resection – median survival 5 months (10).
In the stage I and II neoplasm disease surgery play important role in treatment. Most cases of T2 gallbladder carcinoma is diagnosed in a routine after cholecystectomy specimen histopathological examination (11). After the histopathological diagnosis of gallbladder cancer in the preparation of routine operational after cholecystectomy patient should be referred to a reference center, where it will be possible radical surgery, preferably within two months (11). The goal of surgery is to perform a radical resection (R0), which are likely to only patients in the first and second stage - about 40% of them may survive 5 years. In the second stage, after cholecystectomy there should be performed surgery with partial resection of the right lobe of the liver (non-anatomical 2 cm resection of the liver - gallbladder bile or anatomic segmentectomy 4B and 5) plus dissection around the hepatoduodenal ligament, as well as histological verification of the cystic duct stump (11).
In the above case, the doctor made the mistake of not sending the patient to reoperation within two months after cholecystectomy. His medical behavior was not in accordance with current medical knowledge and recommendations for diagnostic and therapeutic treatment in malignant tumors published in 2013. Therefore the consultant of general and oncological surgery significant reduced the patient chances for a 5-year survival.
Under Article 8 of the Polish Code of Medical Ethics, every physician ought to perform all necessary diagnostic, therapeutic and prophylactic procedures while exercising due care and devoting an appropriate amount of time (12-14). A similarly information can be found in Article 4 of the Act the Professions of Doctor and Dentist, which states that every physician is obliged to exercise their profession according to current medical recommendations, available methods and means of preventing, diagnosing and treating diseases, in compliance with professional ethical principles and the duty of due care.
CRIMINAL LIABILITY OF PHYSICIANS