Poniżej zamieściliśmy fragment artykułu. Informacja nt. dostępu do pełnej treści artykułu tutaj
Zamów prenumeratę czasopisma!
© Borgis - New Medicine 4/2014, s. 133-135
Monika Jabłońska-Jesionowska, Małgorzata Dębska, Renata Koziołek, *Lidia Zawadzka-Głos
Congenital absence of the right pulmonary artery rare casuse of radiological changes suggestive of bronchial foreign body
Department of Pediatric Otorhinolaryngology, Medical University of Warsaw, Poland
Head of Department: Lidia Zawadzka-Głos, MD, PhD
Summary
We report the case of 6.5 year old girl admitted to the Department of Pediatric ENT in Warsaw Medical University in January 2013 suspected of the foreign body in the right bronchus because of the characteristic signs on chest X-ray: emphysema, mediastinal shift to the right, athelectasis and asymmetrical respiratory murmur, weakened on the right. She was investigeted because of persisting cough for more than 3 weeks after infection. The child was qualified for urgent bronchoscopy. The procedure was performed under general anaesthesia using the rigid bronchoscop No. 5. Neither pathology of the respiratory tract nor foreign bodies were found. The further investigation CT scan of the chest shows the absence of the right pulmonary artery. Congenital absence of a right pulmonary artery is a rare abnormality of great vessels. The lack of the right pulmonary artery are often asymptomatic. The abnormal chest X-ray suggesting bronchial foreign body with normal result of bronchoscopy at the same time led to further investigations.
Key words: children, great vessels abnormality, bronchial foreign body, absence of the right pulmonary artery.

INTRODUCTION
A bronchial foreign bodies are a common cause of hospitalization of children on the ENT wards. The common symptoms of a foreign bodies aspiration depends on the type of foreign body and its location. Shortness of breath with respiratory stridor after an episode of choking is an absolute indication for urgent bronchoscopy under general anaesthesia. Chronic cough persisting after treatment of respiratory infections, recurrent bronchitis at the same parts of the lung and characteristic findings in the chest x-ray are also indications for bronchoscopy. Same foreign bodies are already visible on X-ray. Non-visible foreign bodies may appear on radiogram as: emphysema, athelectasis, mediastinal shift. The chest physical examination shows asymmetrical and weakened respiratory murmur, excessive tapping noise and wheeziness. Only performing the bronchoscopy can confirm or exclude the retention of a foreign body in the airways with possibility of evacuation.
CASE REPORT
A 6.5 year old girl was admitted to the Department of Pediatric ENT at Warsaw Medical University in January 2013 from the district hospital suspected of the foreign body in the right bronchus. In an interview: a month ago she has a respiratory tract infection with elevated body temperature, runny nose, cough, treated with an antibiotic. Because of the persisting cough for more than three weeks family doctor ordered chest X-ray examination. The results were as followed: hyperventilation of the left lung, mediastinal shift to the right, atelectasis of the right lung. There was no previous episode of choking. The girl was generally good health, growing up according to her age, attending kindergarten. At the admission to the hospital the auscultation shows: asymmetry of the respiratory murmur, weakened on the right side. In laboratory tests (complete blood count, ESR, CRP), there was no deviation from the norm. The child was qualified for urgent bronchoscopy. The procedure was performed under general anaesthesia using the rigid bronchoscop No. 5. Neither pathology of the respiratory tract nor foreign bodies were found. Only a small amount of mucous secretions was sucked for bacteriological examination. After 18 hours of inspection control chest x-ray was performed with the same results: hyperventilation of the left lung, a shift of the mediastinal structures to the right side, atelectasis of the right lung (fig. 1).

Fig. 1. Chest X-ray: the hyperventilation of the left lung, mediastinal shift to the right.
The physical examination changes were as before. Chest computed tomography (CT) was performed in accordance with the suggestion of radiologist. The results of CT scan of the chest were: the absence of the right pulmonary artery (fig. 2), the right lung vasculaturization by MAPCA from the aorta, subclavian artery and right internal thoracic artery (fig. 3). Right lung volume reduced (fig. 4), mediastinal shift to the right side. 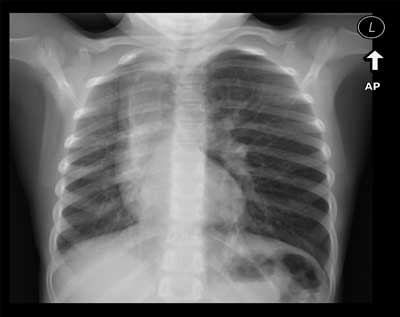 Fig. 2. The absence of the right pulmonary artery. 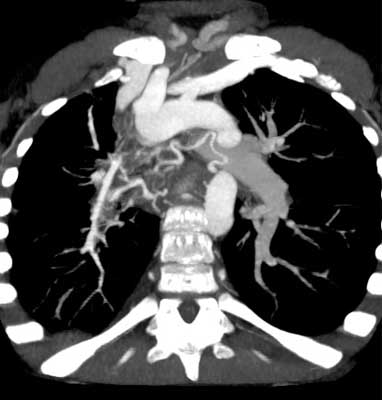 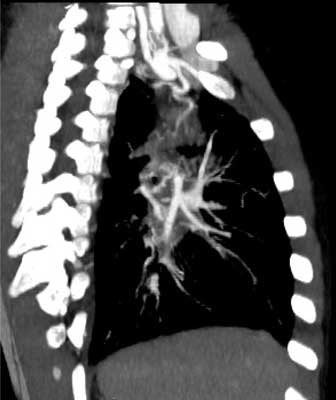