Poniżej zamieściliśmy fragment artykułu. Informacja nt. dostępu do pełnej treści artykułu tutaj
Zamów prenumeratę czasopisma!
Księgarnia Borgis / dział medyczny
© Borgis - New Medicine 2/2002, s. 76-79
Ivo Marik1, K Kozlowski2
Frontometaphyseal dysplasia in a 3 5/12 year-old girl and in the „unaffected mother”
1Ambulant Centre for Defects of Locomotor Apparatus, Prague, Czech Republic
2Royal Alexandra Hospital for Children, Sydney, Australia
Summary
We report a girl with fromtometaphyseal dysplasia in whom the first phenotypic abnormality noted at the age of 3 months was metopic suture torus. At the end of the first year of life knock knee deformity and torsion of the legs was noted and this progressed in spite of orthotic treatment. The diagnosis of frontometaphyseal dysplasia was established at the age of 3 years 5 months. Family studies revealed that the mother, supposed to be normal was also affected. Previously unreported clinical manifestations and radiographic findings are documented to further delineate and expand the spectrum of the disorder.
Key words: frontometaphyseal dysplasia, metopic torus, genu valga, new, medicine, otorhinolaryngology.
INTRODUCTION
Frontometaphyseal dysplasia (FMD) is an uncommon disorder diagnosed rarely at preschool age. We report a girl in whom the first abnormality was a metopic suture torus recognised at the age of 3 months. Knock knee deformity and twisted legs were noted at the end of the first year of life. The mother showed mild expressivity of the disease and was regarded as normal until the diagnosis was made in her daughter (Fig 1A). 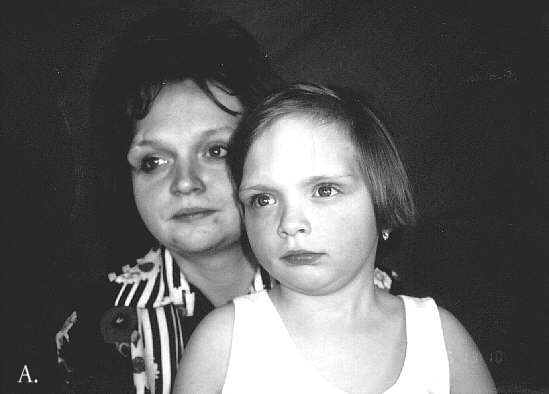 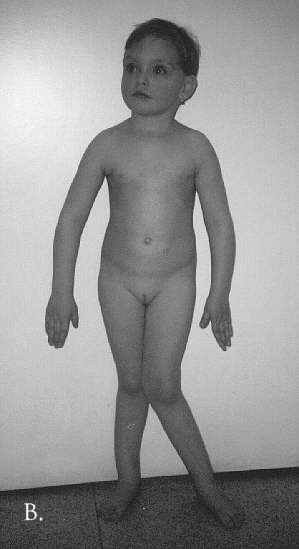 Fig. 1A & B. A. Facial appearance of the proband at the age of 4 1/2 years and the mother at the age of 25 years. Note prominent supraorbital ridges in both the mother and the daughter and the metopic torus in the proband. B. Proband at the age of 3 1/2 years. Severe left sided coxa valga. Minor right sided coxa valga with lateral bowing of the right leg.
CASES REPORT
This Czech girl was born at 36 weeks of gestation to a 24 year old, gravida 1 para 1 mother and a healthy father. The pregnancy was complicated by phlebothrombosis of the left lower extremity with low molecular heparin. Birth weight and length were 2800 g and 49 cm respectively. She required oxygen, drip feeding and antibiotics for the first five days of live because of anaemia and possible sepsis related to the pregnancy. Ultrasound examination disclosed a Grade I subependymal haemorrhage and an atrial septal defect which closed spontaneously. At the age of 3 months a hard, bony prominence along the metopic suture, and in the last few months of the first year of life, progressive knock knee and leg deformities were noted. The latter gradually increased under observation in the next few years of life in spite of orthotic treatment. Her psychomotor development in the first few years of life was normal. At the age of 3 years some kind of metaphyseal dysplasia was diagnosed at the Genetic Department in Ostrava.
She was examined at the Centre for Patients with Defects of the Locomotor System in Prague at the age of 3 years and 5 months (Fig 1B). Her height was 103 cm (75 centile), weight 17 kg (90 centile), head circumference 50 cm (75 centile), chest circunference 57 cm (65 centile). There was bilateral knock knee deformity with torsion of the legs more marked on the left. The range of hip motion and knee flexion was decreased. Her extremities were relatively long in comparison with the trunk. There was scoliosis secondary to leg asymmetry. She had an unusual facial appearance; this was characterised by a high forehead with a prominence along the metopic suture and prominence of the supra-orbital ridges. There was mild hypertelorism, exophthalmos and bilateral epicanthus. The philtrum was long and the chin was small. There was diastasis between the incisors and the teeth were hypoplastic. She had brown straight hair. Her mental development was normal. Inspite of orthotic treatment her leg deformities progressed. At the age of 6 years her height was 119.7 cm (50-75 centile, weight 26 kg (90 centile). Examination of proportions disclosed long upper (+1.5 SD) and lower (+2 SD) extremities. The neck was short (-1.2 SD) and the shoulders relatively narrow (-0.6 SD). The pelvis (+2.5 SD) and the thorax (+1.5 SD) were broad. The skull was scaphocephalic. Head circumference was 52.3 cm (75-90 centile). Her mental development was normal. Her hearing was not affected.
Extensive biochemical investigations specifically those of Ca/P metabolism were normal.
Radiographic examination documented changes characteristic of frontometaphyseal dysplasia. In the skull the density of the base of the skull and od the mid-frontal bone area was increased. The frontal sinus was absent. The teeth were hypoplastic/dysplastic. The ribs were thin and slightly irregular in contour. The scapulae were large, slightly dysplastic with prominent acromion processes. The bodies of the iliac bones were small and there was flaring of the iliac wings. There was bilateral coxa valga. There was a mild undertubulation of the metaphyses of all the long bones which were also slightly bowed. The tibiae were most severly affected and showed S-like deformity in the lateral projection. The patellae were small. The spine was normal and the hands were little affected (Fig 2 A-D). 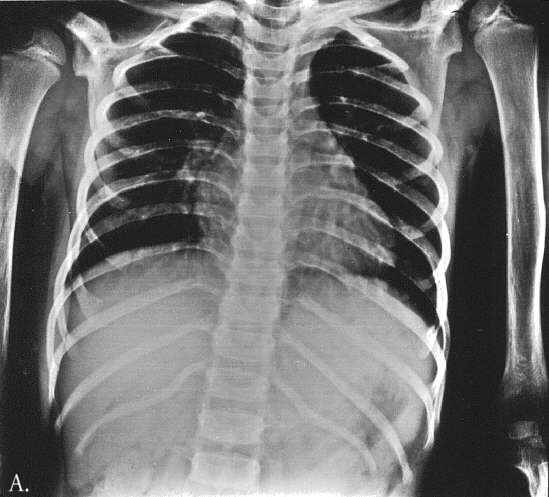 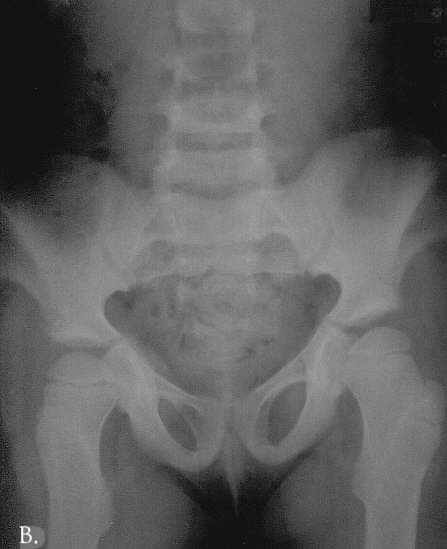 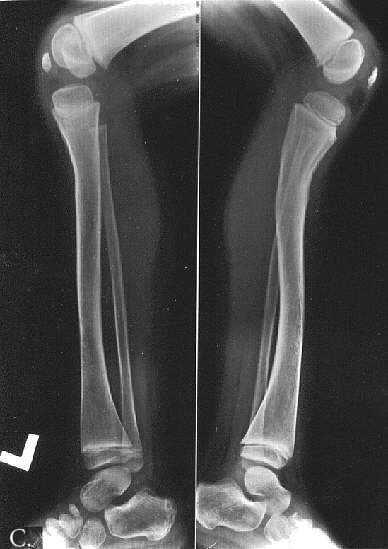 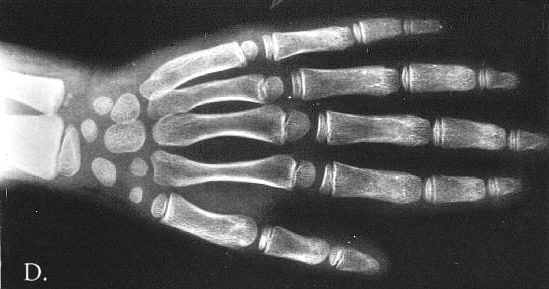 Fig. 2A-D. Thin cortex, abnormal, indistinctive trabecular pattern. A. 5 10/12 year old. Thin ribs. Wavy deformity of the 12-th rib. B. 6 year-old. Flaring of iliac bones, coxa valga. C. 4 10/12 year-old. S-like deformity of the tibia, more marked on the right. Small patellae. D. 6 year-pld. Hypotubulation of the phalanges. Middle phalanges are most severly affected. Minimal dysplastic changes in the carpals and metacarpals. Bone age equals chronological age.
Case II – The mother of case I had a facial appearance similar to her daughter. Her height was 162 cm, weight 56 kg. She had a slight knock knee deformity but no twisting of the legs and her gait was almost normal. Radiographs of the pelvis, skull and left hand documented changes consistent with FMD (Fig 3A-C). 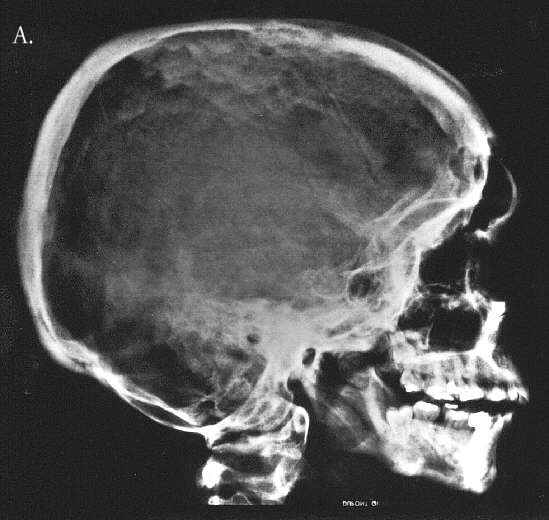 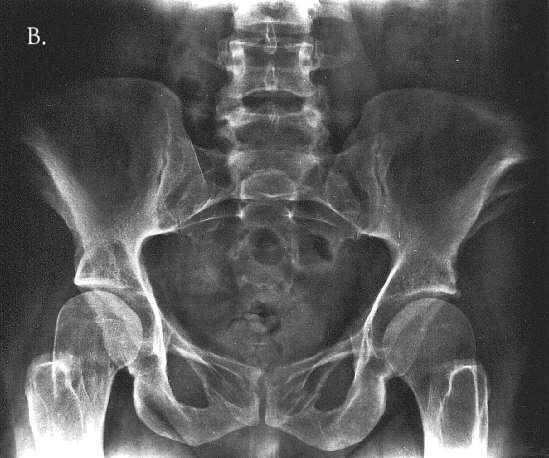 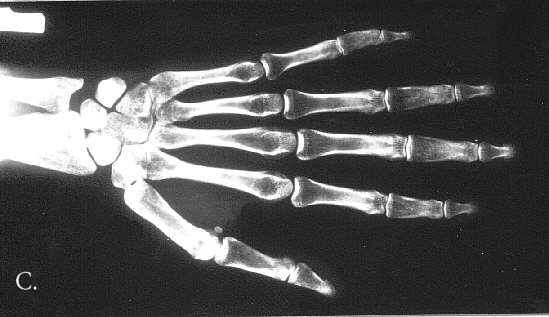