Parathyroid carcinoma is an uncommon cause of primary hyperparathyroidism. Approximately only 400 cases of this disease were reported in the English since 1930 (1-28). The clinical features of parathyroid carcinoma are due primarily to the effects of hypercalcaemia due to excessive PTH secretion and do not consist the typical features of advanced neoplastic disease (1-6, 9-10, 12, 18, 27-28). Thus, unlike in the majority of present-day benign primary hyperparathyroidism cases, signs and symptoms of acute hypercalcemia often dominate the clinical picture in parathyroid carcinoma, the controlling of which becomes, in consequence, the primary goal of the therapy. The critical, life-threatening hypercalcemia (hypercalcemic crisis) of parathyroid carcinoma is treated in the same way as hypercalcemia due to any other case (28-30). Due to the persistently excessive PTH secretion, saline hydration and loop diuretics rarely suffice to control the hypercalcemia, and addition of agents that interfere with osteoclast-mediated bone resorption is always necessary. However, in the case described here, the classic inhibitors of osteoclastic bone resorption, i.e. bisphosphonates, could not be used because of acute renal failure. Upon application the cinacalcet (Mimpara®, Amgen) – a calcimimetic, a drug of a new therapeutic class, a satisfactory reduction of calcemia was achieved.
Case study
A 56-year-old male was admitted to the hospital lethargic and fell asleep during examination. He also experienced intermittent nausea, vomiting, and watery diarrhea, however he denied having any fever, chills, or any other associated symptoms. He also noted excessive thirst and increased in urination but denied dysuria or hematuria. His past medical history was only significant for nephrolithiasis. He was not taking any medications regularly. However, he complained of worsening pain in the spine and pelvis and noted a painful deformation of the right knee and the lower leg. Physical examination revealed blood pressure of 160/80 mmHg, heart rate 96/min regular. His cardiopulmonary exam was unremarkable. Abdominal exam revealed mild tenderness in the epigastrium area and left lower quadrant without any signs of guarding or rigidity. Bowel sounds were active. Acute abdominal series X-ray did not show any acute process. Bedside glucose reading was 115 mg/dl. Laboratory investigation showed normal CBC and urine analysis. Serum creatinine level was 5.4 mg/dL (0.5-1.4 mg/dL). Serum calcium was 14.5 mg/dL (reference range 8-10.5 mg/dL), and ionized calcium was elevated at 1.78 mmol/L (reference range 1.10-1.30 mmol/L) and the acute renal failure in the course of hypercalcemic crisis was diagnosed.
Patient was treated with intravenous fluid hydration and loop diuretic while the etiology of hypercalcemia was being sought. Extremely elevated serum PTH-intact level of 1789 pg/ml confirmed the diagnosis of primary hyperparathyroidism and a possibility of parathyroid carcinoma had been considered. Left knee and lower leg X-ray and CT revealed a typical picture of osteitis fibrosa cystica (fig. 1). Renal failure excluded the possibility of using the standard symptomatic treatment of hypercalcemia, which are bisphosphonates. Hydratation and furosemide treatment improved significantly renal function, however had a very little effect on serum calcium level. Eventually, it was decided to treat patient with calcimimetic – cinacalcet (Mimpara®), recently registered for symptomatic control of hypercalcemia due to primary hyperparathyroidism. After the administration of the drug at the smallest recommended dose of 30 mg twice a day, the serum calcium began to reduce at a quick rate, dropped to 12.24 mg/dL after the third day of the treatment, and after increase of total daily dose to 90 mg/d, subsequently deceased above 12.00 mg/dL. Consequently, the saline hydration was stopped, which in turn did not affect the serum calcium values. After two weeks of cinacalcet treatment the PTH levels also decreased from 1789 pg/ml before the start of the treatment to 785 pg/ml, respectively. Improving the general condition of the patient allowed to perform the parathyroid imagining studies. Technetium 99mTc-MIBI scan as well as computed tomography indicated the enlarged left inferior parathyroid gland (fig. 2). The patient underwent surgery. Enlarged parathyroid tumor (3.0 x 3.0 cm) had been removed with left thyroid lobe and isthmus, and with surrounding, not enlarged and macroscopically unaffected lymph nodes. The left reccurent laryngeal nerves was preserved with neuromonitoring use. Twenty-four hours after surgery, serum calcium was 6.8 mg/dL, phosphorus was 1.6 mg/dL, and PTH was 24 pg/ml, with subtetany symptoms and positive Chvostek’s sign. Patient had been treated with calcium gluconate iv and then with oral calcium carbonate (3.0 g daily) and alphacalcidiol up to 3.0 μg/daily. He was discharged two week later. Histopathological diagnosis of the parathyroid carcinoma had been established. 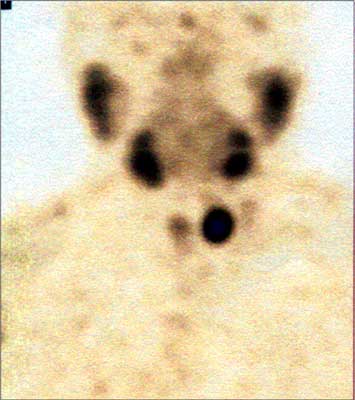