Intracranial haemorrhage has been and still is a frequent perinatal complication (1, 3). It is associated with epidural, subdural, subarachnoid, periventricular and ventricular spaces as well as the cerebral tissue, but rarely the cerebellum (fig. 1, 2, 3, 4, 5, 6) (4, 5, 8). It is primarily found in preterm infants (2). However, it may also occur in full-term newborn, mainly those who are the products of pathological, traumatic labour. Haemorrhage may occasionally be accompanied by fractures to the cranial bones. A spontaneous labour does not necessarily exclude a fracture and/or haemorrhage into the central nervous system (CNS) (3). 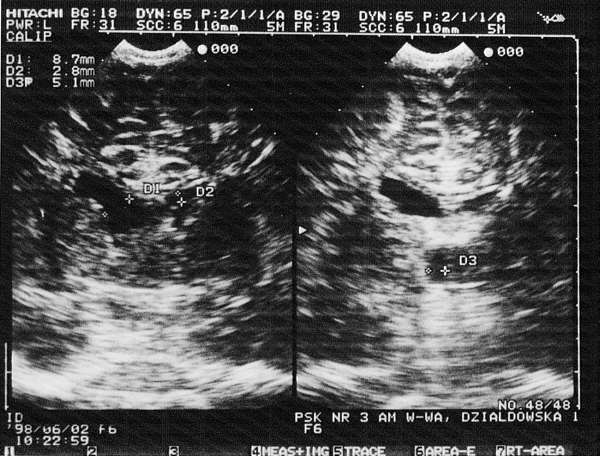 Fig. 1. Complication after an intraventricular haemorrhage: bleeding in the neonatal period (evidently asymmetrical lateral ventricles). Visible significant dilatation and oval contour of the anterior horn on the right.
Haemorrhage into the newborn&acutes CNS in mainly due to a perinatal head injury, cerebral hypoxia, various congenital defects, hypoplasia of the cerebral blood vessels, their immaturity, and a large difference between intra and extrauterine pressures. In all cases haemorrhage may result from, or be aggravated by, coagulation disorders of different aetiology and pathogenesis (4, 5, 8, 9). 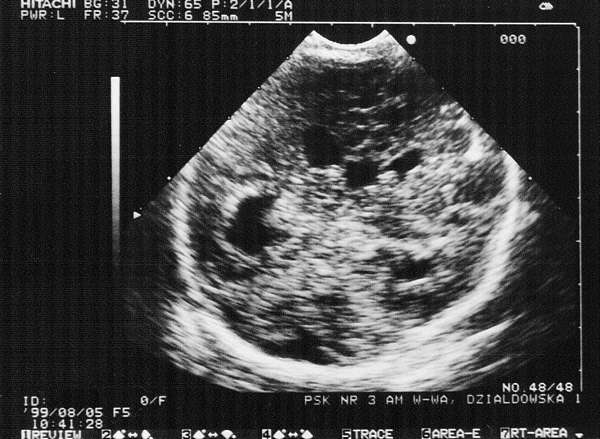 Fig. 2. Bilateral intraventricular haemorrhage: enlarged lateral ventricles with oval contours. Macrogranular choroid vascular plexuses show a large textured cohesion. Visible enlarged third ventricle with a diameter of 7-8 mm.
The best known and researched are peri- and intraventricular haemorrhages, which is largely due to early and repeat USG examination, widely used in our department since 1980, and introduced into our clinical practice by 1962 (6). 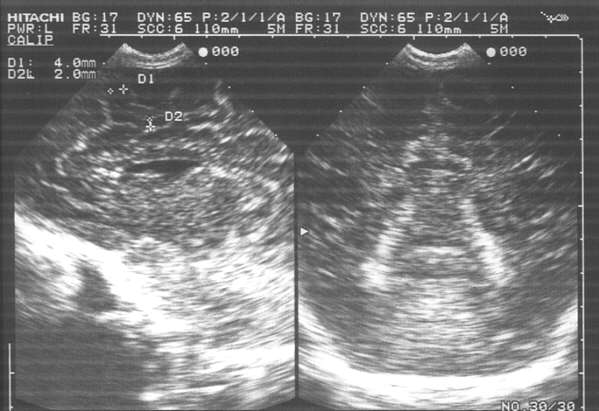 Fig. 3. A healthy, full-term infant with normal body weight. Symmetrical brain structures. Vascular plexuses of lateral ventricles shows a `loose´ texture (coronal plane). A small amount of cerebrospinal fluid present (sagittal plane).
The least frequent in the newborn are extradural haematomas, since at that age their development is prevented by the fusion of the dura matter and the cranial bones. Extradural haemorrhage is caused by fractured cranial bones and a ruptured middle meningeal artery, which, usually in a few hours, leads to substantial extradural accumulation of blood. Such a condition requires an urgent surgical intervention. 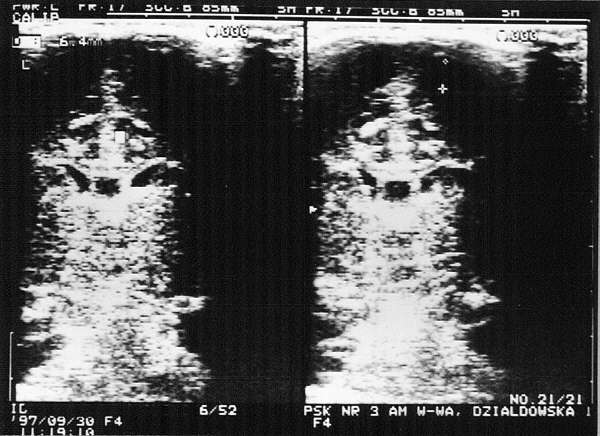 Fig. 4. Subarachnoid haemorrhage: haemorrhagic foci (6-8 mm in diameter) paramedian in the frontoparietal area. Lateral ventricles are normal in size. Visible additional ventricle in the septum pellucidum.
Subdural haemorrhage occurs mainly in full-term infants and is most frequently caused by a rupture of veins at their confluence into the longitudinal cerebral sinus. Injury may occur to the internal cerebral veins, v. of Galen cerebral tentorium or falx, sagittal sinus and/or laternal sinuses. Clinical manifestations accompanying the subdural haematoma depend on the severity of haemorrhage and also on the onset of the condition: acute, subacute or chronic. The criterion we used was the time period from the labour when the condition has its onset and regression, but not its duration. An acute and dramatic development of haematoma occurs after 5 days from injury. The newborn has impaired consciousness, seizures, dyspnoea, opisthotonus, pinpoint pupils, movement of the eyeballs `towards the haemorrhage site´, and papilloedema at the fundi. Frequently, haematoma may lead to coma. The newborn who survives the acute phase of the condition, may, in infancy, develop hydracephalus secondary to a disturbed cerebral flow or absorption of the cerebrospinal fluid. 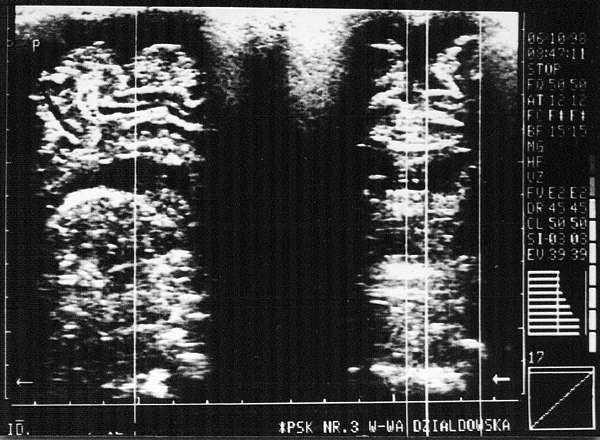 Fig. 5. Subdural haemorrhage. Visible extensive 8-9 mm wide sickle-shaped fluid areas in the apical cerebral vaults. The fluid spaces are also visible in the sagittal plane.
In subacute condition various nonspecific symptoms and signs appear within 6 weeks from the injury, i.e. vomiting, strabismus, a „setting sun sign ”. Later, a chronic haematoma is recognised. It is then very difficult to diagnose considering even a 6-month period from delivery, variability and nonspecificity of clinical manifestations as well as difficulty in its visualisation on the USG examination, even using special technique (frequency transducer Mhz and a distancetip). When the location is very close to the cerebral surface, computer tomography (CT) is the investigation of choice. In such cases translumination with a diaphanoscope may be used as an exploratory examination. 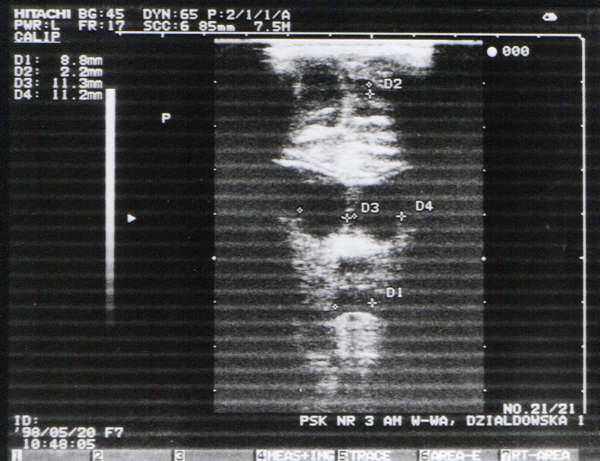