Introduction
Platelets belong to the main components of haemostasis. Their haemostatic function is regulated by numerous binding substances, including their membrane receptors. Thrombin, plasmin, and vessel -derived substances, compounds included in platelet granules such as ADP, thromboxan A2-TXA2, prostoglandyn D2-PGD2, serotonin, von Willebrand-vWF factor and platelet-activating factor PAF condition the normal blood clotting process.
Platelets are also involved in phagocytosis and in natural defence mechanisms. Mustard and Packham were the first to present this phenomenon in 1968 (1). Bacterial phagocytosis with platelets can be carried out via individual platelets (2) or platelet aggregates (3). Platelet activation is possible due to an interaction with immunocompetent cells, IgE, IgG complement components, CRP and lymphokines (4).
Recent studies indicate that platelets are capable of interaction with leukocytes in initiating and maintaining the inflammatory process. Numerous surface platelet proteins and proinflammatory mediators stored in the intracellular aggregates determine the contribution of thrombocytes to such disorders as ARDS (adult respiratory distress syndrome), chronic intestinal inflammation, inflammatory states of intestinal allergic vasculitis, and tuberculosis.
The role of platelets in defence mechanisms in the presence of schistosmosis (5), toxoplasmosis (6) and Giardia intestinalis infection (7) has been described.
Based on increased knowledge of H. pylori, leukocyto-platelet aggregates have been postulated to contribute to gastric lesions in H. pylori infection. Platelet activation caused by this ethiologic factor colonizing the stomach represents an essential vascular component in the pathophysiology of this disease (8).
Apart from the well-defined role of H. pylori as a mediator of gastric mucosa inflammation, duodenal ulcers, and in the development of carcinoma in adults, this bacterium takes a pathogenic part in coronary disease (9). Recent observations support the view that H. pylori may have an influence on the gastric mucosa not only through triggering neutrophilic activation and local cytokine production, but through gastric vascularization as well (8).
In the pathogenesis of H. pylori, both a bacterial strain and the host&acutes immunological response play an important role. H. pylori may produce substances that can directly destroy epithelial cells, decreasing gastric mucosa resistance (10). This bacterium may indirectly cause gastric lesions via cytokine response stimulation in the mucosa (mainly IL-8) (11).
Additionally, H. pylori extracts contain substances inducing chemotactic activity in neutrophils and monocytes that may increase the surface expression of certain molecules affecting neutrophils in particular, due to inflammatory cell response. Increased permeability, leukocyte migration, albumin transudate, mast cell degranulation and platelet-leukocyte aggregation were present with the inflammatory cell response (11).
The purpose of this study was to evaluate the ultrastructural picture of the gastric mucosa and fine blood vessels in children infected with H. pylori and with peripheral blood thrombocytopaenia.
Methods
Ultrastructural examinations of the gastric mucosa were performed in two girls (B.M. and O.C.) aged 12 and 13 years, frequently hospitalised for thrombocytopaenia in the IIIrd Department of Paediatrics, Medical Academy of Bialystok. Because of dyspeptic symptoms in the clinical picture, both girls underwent upper gastrointestinal tract endoscopy. Gastric mucosa was estimated macroscopicaly and histopathologicaly for H. pylori infection (Sydney System assay). During endoscopy the urease test was applied (CLO-test) and mucus was taken from the duodenum to exclude Giardia lamblia infection.
Additionally, biopsy specimens were taken from the antrum, corpus and duodenum for ultrastructural examination. They were fixed in 3.6% glutaraldehyde at 4o C for 2hrs and postfixed in 2% osmium tetroxide for 1hrs. After dehydration in alcohol, they were washed in propylene oxide and embedded in Epon 812. The ultrathin sections were cut on a Reichert ultramicrotome, doubly stained with uranyl acetate and lead citrate, and examined using an electron microscope EM 900 PC (OPTON West Germany).
Results and discussion
Studies carried out on mice Spanish authors prove that platelet aggregation is the most important characteristic of gastric microvascularization in mice infected with H. pylori (8). This effect seems to be highly specific for H. pylori infection, because animals challenged with other bacteria produced only a few platelet aggregates. Some investigators have proved that both leukocyte rolling in blood vessels and platelete aggregation are P and L-selectin-dependent, since blocking these molecules causes a significant reduction in the flow of rolling leukocytes and in a number of aggregates in gastric microvessels. Platelet aggregates in portal blood in H. pylori-infected mice and the inhibition of aggregation after anti P-selectin (mAb) treatment confirm H. pylori infection activation mediated by platelets (8).
Since PAF, leukotrien, tromboxsan and the products of leukocyte and platelet activation are present in the gastric mucosa of patients infected with H. pylori, it seems reasonable to postulate that leukocyte-platelet aggregates take part in the pathogenesis of the gastric mucosa damage.
Numerous changes in fine blood vessels were observed in the ultrastructural picture of the gastric mucosa in H. pylori infected patients.
The lumen of many mucosal capillaries and vessels was filled with erythrocytes mixed with granulocytes, lymphocytes and platelets. These cells were placed loosely or combined forming aggregates (Photo 1). 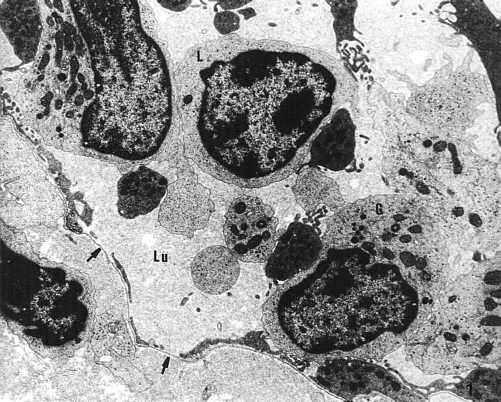