Poniżej zamieściliśmy fragment artykułu. Informacja nt. dostępu do pełnej treści artykułu tutaj
Zamów prenumeratę czasopisma!
Księgarnia Borgis / dział medyczny
© Borgis - New Medicine 4/2010, s. 142-151
*Massimo Cocchi, Lucio Tonello, Fabio Gabrielli, Sofia Tsaluchidu
History of research on depression: biomolecular considerations and philosophical reflections
Institute 'Paolo Sotgiu' Quantitative and Evolutionary Psychiatry and Cardiology L.U.de.S. University, Lugano, Switzerland
Head: prof. Rodolfo Paoletti rector L.U.de.S. University
Summary
Recent studies have demonstrated the existence of significant differences in fatty acid composition of the cell membranes of platelets between depressed humans and apparently healthy subjects.
These differences were identified through the use of advanced mathematical tools. In particular an artificial neural network (ANN), the Self-Organizing Map (SOM) described by Kohonen (1982), was employed. The SOM isolated three fatty acids, arachidonic acid (AA), linoleic acid (LA) and palmitic acid (PA), and was able to map two different populations (normal and depressive), recognizing as similar subjects belonging to the same population.
The work summarizes the main aspects that link platelets, brain and serotonin through lipid cell membrane viscosity.
This seems to be, today, one of the most fascinating hypotheses in the interpretation of depressive disorder. The present work concludes with philosophical reflections about the new feature of technological depression.
Key words: platelets, brain, fatty acids, membrane viscosity, serotonin, consciousness, technological depression.
Introduction
When tackling such a difficult and complex issue as depression, we face, inevitably, not only one of the great mysteries of the brain, but also a century of science on the subject that has, in essence, never used objective assessment tools but has cultivated a concept which abstracts the brain from its normal phenomenology, entering intricate research detached from reality of phenomena that affect intangible and unlikely causes.
The brain becomes an external element to the physical, disconnected from the molecular evidence, and is played mostly in the light of socio-emotional relationships rather than linked to the possibility of endogenous errors, on which these relations have a relative weight or, if they have a weight, it is difficult to translate it into the dynamics of molecules involving inter-intracellular communications downloading those variable responses that are recognized as mood disorders.
Some people think that reducing all to molecular aspects is reductionist if compared with the diagnostic classification of depression.
If it is, you can easily imagine how even more reductionist is the reliance on symptom rating scales. What we have received from the particular research on depression is still, after many passages of interpretation have been made, almost incredible when we think of the origin of the same disease.
The Experimental Work
The initial idea was to analyse the platelet membrane fatty acids of a group of depressed patients and compare them with those of apparently normal people (1-22).
So far nothing exceptional if, viewing the results (tab. 1), we had not perceived that, despite all their traditional significance, they were useless as a diagnostic characteristic of depressive illness.
Table 1. Significance of the results obtained from the comparison of normal and depressed platelet fatty acids.
In fact, almost by instinct on the one hand and not to frustrate a lot of work on the other hand, it was considered if there was a way to process the data obtained that went beyond the trivial statistical calculation, and whether it could give clearer and accurate answers.
Faced with what has been obtained, the first observation was that the mathematical problem of the membrane dynamic was complex, that is, not linear and, therefore, had to be approached differently.
The idea was conceived to process the data using mathematical functions as artificial neural networks and in particular the Self-Organizing Map (SOM) (23-25).
There began hard work of months until, almost like a countdown, the time came when we would be placed in front of the truth about the result.
Who knows the procedures to show the SOM final result knows how the cases will be distributed on the map, and two things can happen: either they are mixed and therefore do not produce results because the target has not been correctly identified, or split because SOM has identified similarities with respect to differences between the parameters.
In our case, the healthy and pathological subjects are clearly separated even though, as we shall see later, interpretations of the cases that were being blended with each other would have been necessary.
Therefore, the network, which had received numbers and certainly did not know they were referred to biological entities, returned to us a conclusive biological result obtained by isolation of only three fatty acids and by the distribution of each triplet on the map (fig. 1).

Fig. 1. Distribution of normal (green) and depressed (red) subjects on the SOM according to the fatty acid triplet (AA, LA and PA).
It has been a long and difficult path to understand the meaning of the numbers and we have used mathematical considerations of various kinds to understand what meaning that unique number could have, derived by the three selected by SOM, which placed the subject studied at one point on the map distributing all cases without even overlapping one another.
We understood that it was not possible to identify what relationship among those numbers had identified the SOM and, therefore, we applied a possible and plausible solution trusting that could provide a glimmer of light.
We built a plausible operation that put in relation the three numbers isolated by SOM that was nothing if not the percentages of three fatty acids, of which, however, one was a saturated fatty acid and the other two polyunsaturated fatty acids.
The result was that after verifying whether the transaction made sense for him and the three fatty acids accounted for the majority of the total of all fatty acids that characterize the platelet membrane, linking the molecular weight and melting point of each of the three fatty acids and their sum, we obtained positive and negative numbers, of course, according to the dominance of saturated or unsaturated fatty acids (B2 index).
All results were redistributed on a map (fig. 2), this time mono-dimensional, and the surprise was that all cases coded by the number obtained by summation were distributed in a logical sequence in perfect progression from the more unsaturated (the depressed) to the most saturated (the normal).

Fig. 2. B2 index distribution on a mono-dimensional map.

It was therefore evident that the membrane characteristics of depressed subjects had a higher degree of unsaturation, a condition which makes membranes more fluid or less viscous.
In fact we saw, in the characterization of depression, as arachidonic acid was of major importance, albeit in combination with others, being characterized by the highest degree of unsaturation.
Our findings, moreover, were in agreement with the international literature data. We do not know if we were pushed more by curiosity or by desire to solve the problem, so we consulted some friends, world reputation scientists, who knew the job done and considered it of great interest.
Not only that, our work seemed to provide them some glimmers of explanation even in their own work. We found ourselves in Italy and organized a discussion. To proceed in an understandable way it is correct to explain who they are, what they do and what scientific studies characterize their activities.
It is good to start with Mark Rasenick, who, with his group, is studying important molecular aspects in the brains of suicides for psychiatric causes, then Stuart Hameroff, recognized as the father of consciousness studies, who, with Roger Penrose, applied in quantum computation the tubulin-consciousness step. Finally Kary Mullis (Nobel Prize for PCR) had successfully verified the procedures we adopted for the development of mathematical research, fortunately for us.
To describe the details of the long meeting would be complicated and difficult, so we report the synthesis. The hypothesis that increasingly took shape was that, at the neuron and platelet level, was achieved, in certain circumstances, a molecular cascade that begins with the viscosity of membrane involving GS-? protein, hence the tubulin, which has a strong connection with it, and that everything could influence the conscious state.
It drew so, according to real tests, the very likely possibility of a real molecular cascade which shows as a major mediator of the depressive phenomenon the biochemical characteristics of the membrane.
We started from three trivial numbers and there was a clear link with consciousness.
The step was as unthinkable as important as Kary Mullis stated that our discovery could revolutionize the world of medicine, philosophy and religion (26).
The search of bibliographic information never found conflicts with the research, but gave strength to continue the road taken. In fact everything was turning into our hands and we began to perceive that what had emerged from that exceptional meeting brought much further than we thought and, inevitably, their encroachment into philosophy and religion.
The molecular pathway of consciousness (fig. 3), of what we digest every detail and that only we know, took us to extraordinary thoughts that we will try to explain simply. In fact the path that we built was entirely plausible, there were, already, works that had measured, without molecular references, the frequency of ?-synchrony in different psycho-pathological conditions and in different stages of meditative intensity. If our reasoning was correct and ?-synchrony, as Hameroff believes (27, 28), is the best correlate of consciousness, then the path within the organism can be measured. 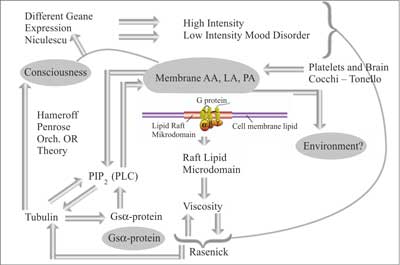 Fig. 3. In figure is described the molecular depression hypothesis made according to Cocchi (Cocchi et al., 2008a), Rasenick (Donati et al., 2008), Hameroff (Hameroff and Penrose, 1996) experimental findings. Because of the possible similarity of platelets to neurons, the membrane viscosity can modify the Gs? protein status. The Gs? protein is connected with Tubulin. Tubulin, depending on local membrane lipid phase concentration, may serve as a positive or negative regulator of phosphoinositide hydrolysis (PIP2) such as G proteins do. Tubulin is known to form high-affinity complexes with certain G proteins. The formation of such complexes allows tubulin to activate Gs? and fosters a system whereby elements of the cytoskeleton can influence G-protein signaling. Rapid changes in membrane lipid composition or in the cytoskeleton might modify neuronal signalling through such a mechanism.
It was precisely the concept of measurability, albeit through quantum computation, which led us to believe in the existence of possible intangible phenomena that could not be measured up to the body, of course, within the changes, on the inside, who could achieve this phenomenon (fig. 4). 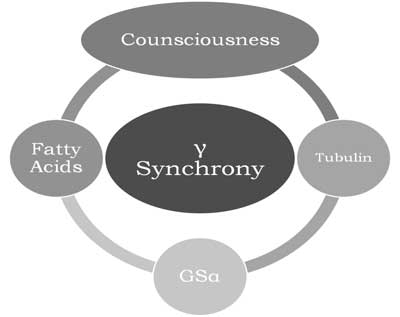 Fig. 4. Links between fatty acids (platelets and brain), Gs? protein, tubulin and conscience. Measurable by ?-synchrony?
It seemed trivial, but in a meeting in Thessaloniki, where this concept was reported (1st International Congress on Neurobiology and Clinical Psychopharmacology
and European Psychiatric Association Conference on Treatment Guidance, Thessaloniki, Greece, 19-22 November 2009), a deep debate with a theologian opened the possibility of running a research project with the Faculty of Theology of Thessaloniki and the Orthodox Church.
Kary?s words came true. It seemed possible, compared to something concrete, to slip outside the body finding confirmation that there could be, no doubt that indeed there is, an external variable that is outside the control of mathematical possibilities now known and is materialized in molecular sequences within the body, again measured using complex mathematical functions such as neural networks and ?quantum computation?.
There arose at the same time the comparison with the animal and one could go on indefinitely in discussing whether the animal could be achieved by intangible phenomena or whether they have consciousness of self. Perhaps the strong guidance of our Christian-Catholic thinking, surfaced in mind that there was a condition that was certainly different between men and animals, that is the vocation.